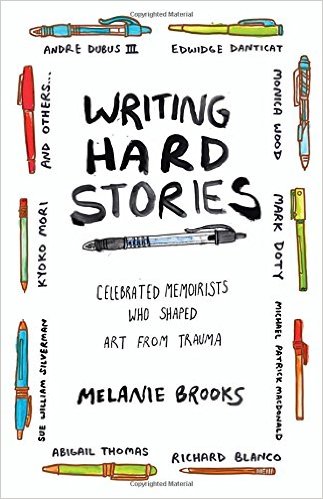 About the Book: In her attempt to write a memoir about her father’s death from a secret AIDS infection in 1985, Melanie Brooks was left with some painful questions: What does it take to write an honest memoir? And what happens to us when we embark on that journey? Would she manage it? Brooks sought guidance from the memoirists who most moved her including Andre Dubus III, Monica Wood, Joan Wickersham, Mark Doty, Marianne Leone, Richard Hoffman, Edwidge Danticat, Michael Patrick MacDonald, Richard Blanco, Abigail Thomas, Sue Silverman, Kate Bornstein, Jerald Walker, and Kyoko Mori to answer these questions. Writing Hard Stories encourages all writers as they work through their challenging stories. It features some of the country’s most admired writers discussing their treks through dark memories and breakthrough moments, and it demonstrates the healing power of putting words to experience. A unique compilation of authentic stories about the death of a partner, parent, or child; about violence and shunning; and about the process of writing, the book will serve as a tool for teachers of writing and give readers an intimate look into the lives of the authors they love.

About the Author: Melanie Brooks is a writer, teacher, and mother living in Nashua, New Hampshire with her husband, two children, and yellow Lab. She received her MFA in creative nonfiction from the University of Southern Maine’s Stonecoast Master’s in Fine Arts program. She teaches college writing at Northeastern University in Boston, Massachusetts, and Merrimack College in Andover, Massachusetts. She also teaches creative writing at Nashua Community College in New Hampshire. Her work has appeared in Bustle, Creative Nonfiction, Hippocampus, The Huffington Post, The Manifest-Station, Modern Loss, Solstice Literary Magazine, The Recollectors, Stonecoast Review, Washington Post, and Word Riot. Her almost-completed memoir explores the devastating impact of living with the ten-year secret of her father’s HIV disease before his death in 1995. Brooks’s writing is the vehicle through which she’s starting to understand that impact.

After his wife dies in a car accident, bisexual writer and activist Steve Abbott moves with his two-year-old daughter to San Francisco. There they discover a city in the midst of revolution, bustling with gay men in search of liberation―few of whom are raising a child.

Steve throws himself into San Francisco’s vibrant cultural scene. He takes Alysia to raucous parties, pushes her in front of the microphone at poetry readings, and introduces her to a world of artists, thinkers, and writers. But the pair live like nomads, moving from apartment to apartment, with a revolving cast of roommates and little structure. As a child Alysia views her father as a loving playmate who can transform the ordinary into magic, but as she gets older Alysia wants more than anything to fit in. The world, she learns, is hostile to difference.

In Alysia’s teens, Steve’s friends―several of whom she has befriended―fall ill as AIDS starts its rampage through their community. While Alysia is studying in New York and then in France, her father tells her it’s time to come home; he’s sick with AIDS. Alysia must choose whether to take on the responsibility of caring for her father or continue the independent life she has worked so hard to create.

Reconstructing their life together from a remarkable cache of her father’s journals, letters, and writings, Alysia Abbott gives us an unforgettable portrait of a tumultuous, historic time in San Francisco as well as an exquisitely moving account of a father’s legacy and a daughter’s love.

About the Author: Alysia Abbott was born in Atlanta, Georgia and grew up in San Francisco’s Haight Ashbury, the only daughter of gay poet and critic Steve Abbott. After receiving her MFA in Creative Nonfiction from New School University in NYC, she worked at the New York Public Library and WNYC Radio. In 2013, she published her first book, Fairyland: A Memoir of My Father, which was named a New York Times “Editors’ Choice,” a winner of the ALA Stonewall Award, and the Madame Figaro Prix Heroine. Her work has appeared in Vogue, Slate, Salon, TheAtlantic.com, Real Simple, the Boston Globe, and Psychology Today. She is also director of the Boston Literary District and founder of TheRecollectors.com.

The son of a Baptist pastor and deeply embedded in church life in small town Arkansas, as a young man Garrard Conley was terrified and conflicted about his sexuality.

When Garrard was a nineteen-year-old college student, he was outed to his parents, and was forced to make a life-changing decision: either agree to attend a church-supported conversion therapy program that promised to “cure” him of homosexuality; or risk losing family, friends, and the God he had prayed to every day of his life. Through an institutionalized Twelve-Step Program heavy on Bible study, he was supposed to emerge heterosexual, ex-gay, cleansed of impure urges and stronger in his faith in God for his brush with sin. Instead, even when faced with a harrowing and brutal journey, Garrard found the strength and understanding to break out in search of his true self and forgiveness.

By confronting his buried past and the burden of a life lived in shadow, Garrard traces the complex relationships among family, faith, and community. At times heart-breaking, at times triumphant, this memoir is a testament to love that survives despite all odds.

About the Author: Garrard Conley’s fiction and nonfiction can be found in Time, Vice, The Virginia Quarterly Review, and on CNN.com, Buzzfeed, and elsewhere. His memoir, Boy Erased, has recently been nominated for a LAMBDA Literary Award. He has received scholarships from the Bread Loaf, Sewanee, and Elizabeth Kostova Foundation writers’ conferences. Conley lives and teaches in Brooklyn, New York.

About Love and Fury:

Richard Hoffman sometimes felt as though he had two fathers: the real one who raised him and an imaginary version, one he talked to on the phone, and one he talked to in his head. Although Hoffman was always close to the man, his father remained a mystery, shrouded in a perplexing mix of tenderness and rage. When his father receives a terminal cancer diagnosis, Hoffman confronts the depths and limitations of their lifelong struggle to know each other, weighing their differences and coming to understand that their yearning and puzzlement was mutual.

With familial relationships at its center, Love & Fury draws connections between past and present, from the author’s grandfather, a “breaker boy” sent down into the anthracite mines of Pennsylvania at the age of ten, to his young grandson, whose father is among the estimated one million young black men incarcerated today. In a critique of culture and of self, Hoffman grapples with the way we have absorbed and incorporated the compelling imagery of post WWII America and its values, especially regarding class, war, women, race, masculinity, violence, divinity, and wealth.

A masterful memoirist, Hoffman writes not only to tell a gripping story but also to understand, through his family, the social and ethical contours of American life. At the book’s core are the author’s questions about boyhood, fatherhood, and grandfatherhood, and about the changing meaning of what it means to be a good man in America, now and into the future.

About the Author: Richard Hoffman is the author of seven books, including the celebrated Half the House: a Memoir, published in a 20th Anniversary Edition last year, and the 2014 memoir Love & Fury. In addition to the volume, Interference and Other Stories, he has published four collections of poetry, Without Paradise; Gold Star Road, winner of the Barrow Street Press Poetry Prize and the Sheila Motton Award from The New England Poetry Club; Emblem; and most recently, Noon until Night. His work, both prose and verse, has been appearing regularly for the past forty years in such journals as Agni, Barrow Street, Consequence, Harvard Review, Hudson Review, The Literary Review, Poetry, Witness and elsewhere. A former Chair of PEN New England, he is Senior Writer in Residence at Emerson College.

Love and Fury: A Memoir (Paperback)

Boy Erased: A Memoir of Identity, Faith, and Family (Paperback)