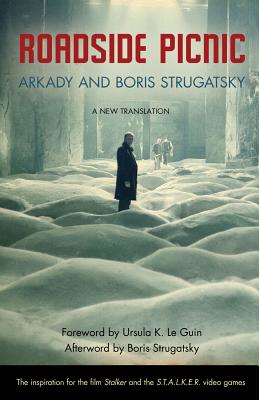 The Trident "SF" Club is for lovers of Science Fiction! The club's reading selection will run the gamut between 19th century "speculative" fiction through the heady days of 60's luminaries such as Philip K. Dick, J.G. Ballard, & Ursula Le Guin, up through the 80's & 90's with selections from William Gibson, Kim Stanley Robinson and Damon Knight - and many more! This club's purpose is to celebrate the conceptual possibilities for better (and worse) futures past & present, and to discuss the import of those concepts to our present dystopia.

June's book is Roadside Picnic, by Arkady and Boris Strugatsky.

Red Schuhart is a stalker, one of those young rebels who are compelled, in spite of extreme danger, to venture illegally into the Zone to collect the mysterious artifacts that the alien visitors left scattered around. His life is dominated by the place and the thriving black market in the alien products. But when he and his friend Kirill go into the Zone together to pick up a “full empty,” something goes wrong. And the news he gets from his girlfriend upon his return makes it inevitable that he’ll keep going back to the Zone, again and again, until he finds the answer to all his problems.

First published in 1972, Roadside Picnic is still widely regarded as one of the greatest science fiction novels, despite the fact that it has been out of print in the United States for almost thirty years. This authoritative new translation corrects many errors and omissions and has been supplemented with a foreword by Ursula K. Le Guin and a new afterword by Boris Strugatsky explaining the strange history of the novel’s publication in Russia.

Get 20% off the book online or in store with the coupon code PICNIC20.