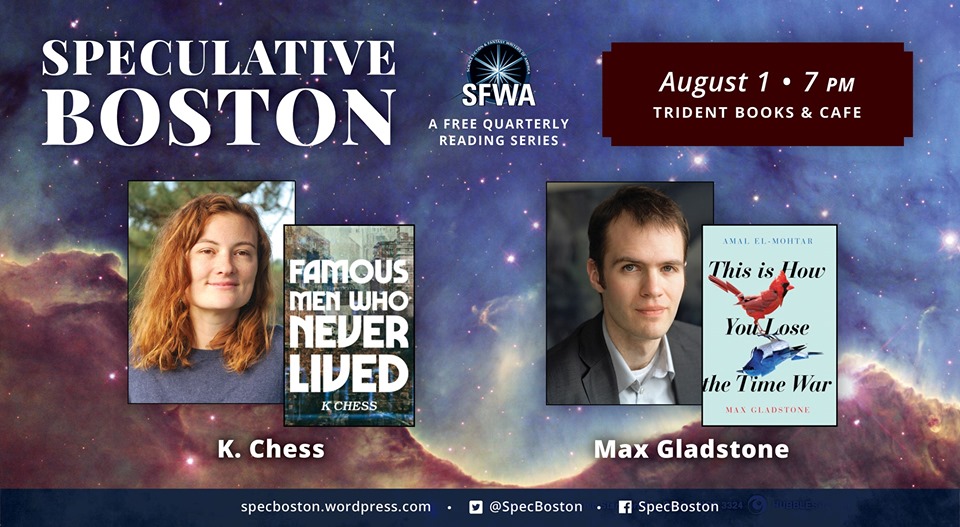 Speculative Boston is a new quarterly event, featuring authors of scifi, fantasy, and horror of all kinds. Join us on August 1st! Our guest authors will be K. Chess and Max Gladstone, who will be talking about their latest works and the wonders of speculative fiction!

K Chess is the author of FAMOUS MEN WHO NEVER LIVED (Tin House Books, 2019). Her writing has appeared in The Chicago Tribune’s Printer’s Row Journal, PANK, Salon, Tor.com and other outlets. Her short stories have been honored by the Nelson Algren Literary Award and the Pushcart Prize. K earned a BA from Vassar College and an MFA from Southern Illinois University. She was awarded a W.K. Rose Fellowship in the Creative Arts. She reads fiction for Quarterly West and teaches writing at GrubStreet in Boston and Rhode Island.

Max Gladstone has been thrown from a horse in Mongolia and nominated twice for the John W Campbell Best New Writer Award. Tor Books published FOUR ROADS CROSS, the fifth novel in Max’s Craft Sequence (preceded by THREE PARTS DEAD, TWO SERPENTS RISE, FULL FATHOM FIVE, and LAST FIRST SNOW) in July 2016. Max’s game CHOICE OF THE DEATHLESS was nominated for a XYZZY Award, and FULL FATHOM FIVE was nominated for the Lambda Award. His short fiction has appeared on Tor.com and in Uncanny Magazine.  His most recent project is the globetrotting urban fantasy serial BOOKBURNERS, available in ebook and audio from Serial Box, and in print from Saga Press.

This Is How You Lose the Time War (Hardcover)

Empress of Forever: A Novel (Paperback)