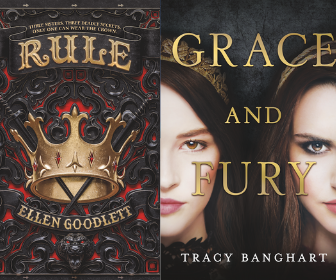 *UPDATE: Tracy Banghart will unfortunately no longer be able to join us for this event.*

Join us for a reading, signing, and riveting author talk featuring YA writers Tracy Banghart (Grace and Fury) and Ellen Goodlett (Rule)!

Three girls. Three deadly secrets. Only one can wear the crown. Zofi has spent her entire life traveling across the Reaches. Just when her freedom matters most, the king's men arrive and drag her away from her fellow Travelers to bring her to the capital--Kolonya. Ren grew up in Kolonya, serving as a ladies&#39; maid at court. She dreams of being a noble herself one day, but being ominously summoned to the king's courtroom after a misdeed isn't exactly what she had in mind. Akeylah was raised by an abusive father in the Eastern Reach, surrounded by brewing insurrection. She'd do anything to escape her family, even accept the invitation of a king who has every reason to despise her.

Each girl hides a dangerous secret--the kind that could get her killed for treason. But when the girls are brought before King Andros expecting an execution, instead they learn the truth: the king is dying and they are his only
living heirs. Now the three of them must live at court and compete for the chance to rule. But someone in Kolonya knows the girls' secrets, and they'll stop at nothing to keep them from the throne.

Set in a world where women have no rights, sisters Serina and Nomi Tessaro face two very different fates: one in the palace, the other in prison. Serina has been groomed her whole life to become a Grace--one of the group of beautiful women who will be selected to stand by the heir to the throne as shining, subjugated examples of the perfect woman. But when her headstrong and rebellious younger sister, Nomi, catches the heir's eye, it's Serina who takes the fall for the dangerous secret that Nomi has been hiding. Now trapped in a life she never wanted, Nomi has only one way to save Serina: surrender to her role as a Grace until she can use her position to release her sister. This is easier said than done: a traitor walks the halls of the palace, and deception lurks in every corner. But Serina is running out of time, imprisoned on an island where she must fight to the death to survive and one wrong move could cost her everything. Bold, brutal, and beautiful, this is a story of fierce sisterhood, full of action and political intrigue.

PRAISE FOR GRACE AND FURY:

“If you're looking for a new read to add to your ever-growing list, Grace and Fury by Tracy Banghart is one you shouldn't miss. … It's full of suspense, deception and #girlpower.”—Her Campus

“The Handmaid's Tale meets The Bachelor, Grace and Fury is fast-paced, feminist, and a perfect summer read.”—Bustle

“Goodlett treats readers to juicy gossip, court intrigue, and danger. [Her] worldbuilding is detailed and politically astute......providing a satisfying build toward a cliffhanger ending."
--- Publishers Weekly

"Goodlett weaves an absorbing narrative of political intrigue, friendship, and romance...the cliffhanger conclusion will leave readers desperate for the next volume."
--- BCCB

Ellen Goodlett is the author of several science fiction short stories, a comic book collaborator, and young adult novelist. A former New Yorker, she is currently traveling the world with 79 other digital nomads, living in a
different country every month. Traveling provides a lot of inspiration for her fantasy worlds

Tracy Banghart grew up in rural Maryland and spent her summers on a remote island in northern Ontario. All that isolation and lovely scenery gave her the time to read voraciously and the inspiration to write her own stories.
Always a bit of a nomad, Tracy now travels the world Army-wife style with her husband, son, and several mischievous fur babies. She wrote Grace and Fury while living in Hawaii.

By Ellen Goodlett
Not currently in store. May be available on Bookshop.org.
ISBN: 9780316515283
Availability: Find us on Bookshop.org to order!
Published: Little, Brown Books for Young Readers - September 11th, 2018

By Tracy Banghart
Not currently in store. May be available on Bookshop.org.
ISBN: 9780316471411
Availability: Find us on Bookshop.org to order!
Published: Little, Brown Books for Young Readers - July 31st, 2018
No Content