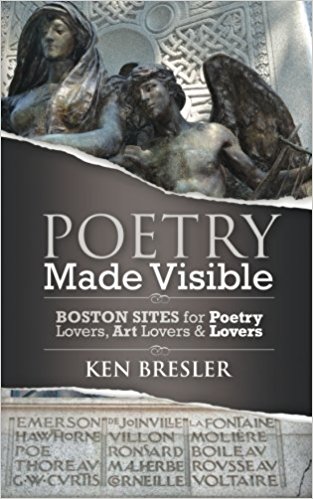 Join us for a reading by several talented local Boston poets in support of Ken Bresler's new book, "Poetry Made Visible!"

This is a guidebook about the intersection of poetry and public art in Boston: poetry installations and statues and busts of poets. This book is for tourists and natives of the Greater Boston area, for students and teachers, for lovers of poetry and lovers of public art. You’ve heard of a date movie? This can be a date book. Take this book on a date. This book is for lovers and lovers-to-be.
This book has four sections: Poetry made visible in the Boston Public Library, on the Orange Line of the MBTA/Southwest Corridor Park, in dispersed sites throughout Boston, and in the Davis Square station on the Red Line.

Ken Bresler is a writer and occasional poet in the Boston area. He is the author of The Witch Trial Trail and the Harvard Witch Walk: The People and Places of Boston and Harvard Connected with the Salem Witch Trials (1992) and H. H. Richardson: Three Architectural Tours (forthcoming).

Deborah Leipziger is an author, poet, and professor. Her chapbook, Flower Map, was published by Finishing Line Press (2013). In 2014, her poem “Written on Skin” was nominated for a Pushcart Prize. Born in Brazil, Ms. Leipziger is the author of several books on human rights and sustainability. Her poems have been published in Salamander, Voices Israel, POESY, Wilderness House Review, Ibbetson Street, and the Muddy River Poetry Review. Read more at http://flowermap.net.

Peter Payack is a father, a coach, a writer, a marathon runner, a professor, an inventor, a sky artist, a Cambridge community activist, a CBS weather watcher and a recipient of the 2018 Marquis Who’s Who Lifetime Achievement Award. He was the first Poet Populist of Cambridge Massachusetts (2007-2009).  His innovation, Phone-a-Poem, the Cambridge/Boston Poetry Hotline (1976-2001) along with his work and realia, were recently archived at Harvard’s Lamont Library in the Woodberry Poetry Room.

E.J. Graff is an award-winning journalist, author, editor, and public speaker, whose work has appeared in dozens of publications, including The New York Times Magazine, The Nation, Newsweek, Politico, and Vice. Her book "What Is Marriage For? The Strange Social History of Our Most Intimate Institution" (Beacon Press, 1999, 2004) was called the "bible" of the marriage equality movement. She is currently the managing editor of The Monkey Cage at the Washington Post, and speaks frequently at colleges and universities around the country. Find more at ejgraff.com.