Nobody's Fool: The Life and Times of Schlitzie the Pinhead w/ Bill Griffith and Robert Pinsky 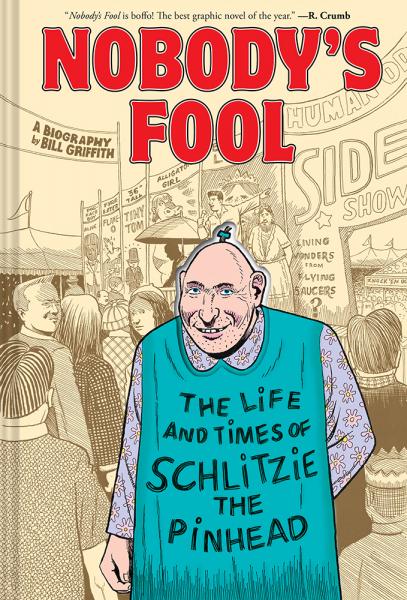 Join us for a talk and visual presentation with Bill Griffith, the creator of the syndicated daily comic strip Zippy. Griffith’s prolific output has been included in such publications as the VillageVoice, National Lampoon, and the New Yorker. Griffith coined the popular phrase “Are we having fun yet?”

Griffith will be joined by Robert Pinsky, former Poet Laureate of the United States.

The presentation will be followed by a Q&A and signing.

Nobody’s Fool follows the story of Schlitzie’s long career—from Coney Island and the Ringling Bros. Circus to small-town carnivals and big-city sideshows—which is one of legend. Today, Schlitzie is most well-known for his appearance in the cult classic Freaks. The making of Freaks and Schlitzie’s role in the film is a centerpiece of the book. In researching Schlitzie’s life (1901–1971), Griffith has tracked down primary sources and archives throughout the country, including conducting interviews with those who worked with him and had intimate knowledge of his personality, his likes and dislikes, how he responded to being a sideshow “freak,” and much more. This graphic novel biography provides never-before-revealed details of his life, offering a unique look into his world and restoring dignity to his life by recognizing his contributions to popular culture.

Bill Griffith is the creator of the syndicated daily comic strip Zippy and the critically acclaimed graphic memoir Invisible Ink: My Mother’s Love Affair with a Famous Cartoonist. Griffith’s prolific output has been included in such publications as the Village Voice, National Lampoon, and the New Yorker. According to Bartlett’s Familiar Quotations, Griffith is credited with coining the phrase “Are we having fun yet?” He lives in Hadlyme, Connecticut.

Robert Pinsky‘s At the Foundling Hospital was nominated for the 2017 National Book Critics Award in poetry. As Poet Laureate of the United States (1997-2000), he founded the Favorite Poem Project, featuring the videos at www.favoritepoem.org. Pinsky’s best-selling translation The Inferno of Dante received the Los Angeles Times Book Award. His other awards include the Lenore Marshall Prize, the Korean Manhae Prize, the Italian Premio Capri and a Lifetime Achievement Award from the Pen American Center.

Robert Pinsky is the only member of the American Academy of Arts and Letters to have appeared on The Simpsons and The Colbert Report.

Nobody's Fool: The Life and Times of Schlitzie the Pinhead (Hardcover)