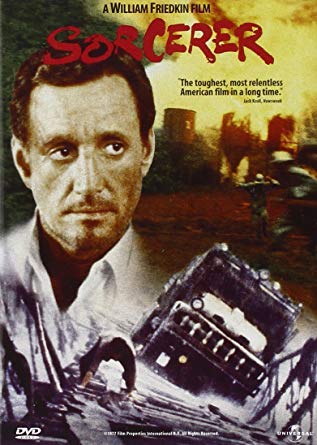 Join us for a screening of the inaugural film in a series curated by Trident's own movie buff, Max!

Based on the 1950 novel Le Salaire De La Peur by Georges Arnaud, and the 1953 film of the same name (The Wages of Fear), Sorcerer is a rediscovered classic. Directed by William Friedkin (The Exorcist, The French Connection), the story concerns four desperate men trapped in the same remote South American town who take an extremely dangerous job: transporting unstable nitroglycerin across a treacherous mountain pass in order to put out a blazing oil derrick.

Starring Roy Scheider and an international cast, the film was commercially unsuccessful, due to the fact that it released in the summer of 1977, the same summer as Star Wars was released; audiences were also perhaps expecting another supernatural thriller from the director of The Exorcist. But seen with the clarity of time, the film is unquestionably a master work, full of teeth-clenching suspense and tension, each frame full of color and life.

This screening is open to the public, no ticket necessary!