Irrevocable Conditions: A Night of Travel Writing by People of Color 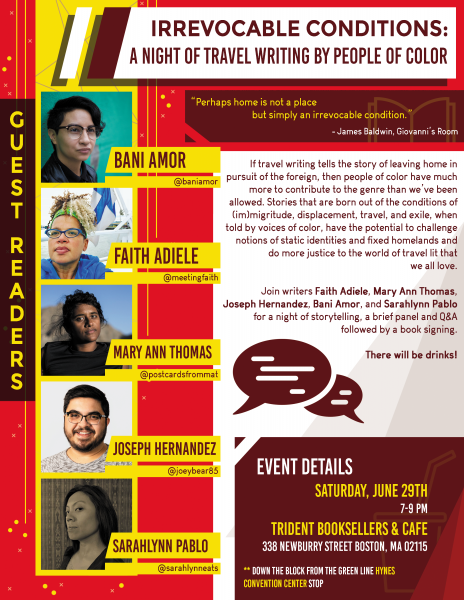 “Perhaps home is not a place but simply an irrevocable condition.” ― James Baldwin, Giovanni's Room

If travel writing tells the story of leaving home in pursuit of the foreign, then people of color have much more to contribute to the genre than we’ve been allowed. Stories that are born out of the conditions of (im)migritude, displacement, travel, and exile, when told by voices of color, have the potential to challenge notions of static identities and fixed homelands and do more justice to the world of travel lit that we all love. Join writers Faith Adiele, Mary Ann Thomas, Joseph Hernandez, Bani Amor, and Sarahlynn Pablo for a night of storytelling, a brief panel and Q&A followed by a book signing.

Asking for Elephants: Photos and essays take you along with Mary Ann and Daniel, friends who decided to bicycle from the Himalayas in the far north of India all the way to the southern tip of the subcontinent. Along the way they contemplate friendship, war, sharing food, the culture of pilgrimage, and most poignantly, the meaning of home. Mary Ann is the daughter of Indian immigrants to the US and Daniel is a white Canadian. Both are queer, and both have a thoughtful, open view of the world that shines through each page and makes you see your own home and place in the world in new ways. It may also make you immediately call up a close friend to suggest traveling together.

Meeting Faith: The Forest Journals of a Black Buddhist Nun:  A wry account of the road from Harvard scholarship student to ordination as northern Thailand's first black Buddhist nun. Reluctantly leaving behind Pop Tarts and pop culture to battle flying rats, hissing cobras, forest fires, and decomposing corpses, Faith Adiele shows readers in this personal narrative, with accompanying journal entries, that the path to faith is full of conflicts for even the most devout. Residing in a forest temple, she endured nineteen-hour daily meditations, living on a single daily meal, and days without speaking. Internally Adiele battled against loneliness, fear, hunger, sexual desire, resistance to the Buddhist worldview, and her own rebellious Western ego. Adiele demystifies Eastern philosophy and demonstrates the value of developing any practice―Buddhist or not. This "unlikely, bedraggled nun" moves grudgingly into faith, learning to meditate for seventy-two hours at a stretch. Her witty, defiant twist on the standard coming-of-age tale suggests that we each hold the key to overcoming anger, fear, and addiction; accepting family; redefining success; and re-creating community and quality of life in today's world.

Mary Ann Thomas is a New Jersey-born-and-raised queer South Asian traveler. She has been published in The Rumpus, Panorama: The Journal of Intelligent Travel, Brown Girl Magazine, and Word Riot, is a VONA/Voices fellow, and co-author of Asking for Elephants. She writes about her adventures as a travel professional and long-distance bike tourist.

Faith Adiele (http://adiele.com) is author of The Nigerian-Nordic Girl’s Guide to Lady Problems, a humorous e/audiobook about fibroids, and Meeting Faith, a memoir about becoming Thailand’s first black Buddhist nun that won the PEN Open Book Award. Writer/narrator/subject of My Journey Home, a PBS documentary about her international family, she is co-editor of Coming of Age Around the World: A Multicultural Anthology. Founder of African Book Club and the nation’s only writing workshop for travelers of color, Faith is Senior Editor for Panorama travel journal and teaches at California College of the Arts, Stonecoast, the Writers’ Grotto and Left Margin Lit.