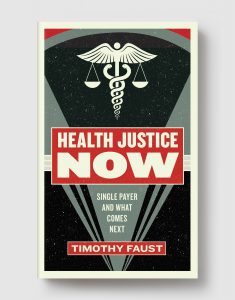 Author and activist Timothy Faust will be reading from his new book, Health Justice Now, and answering audience questions about singler-payer insurance and the state of health care in America.

The sun is setting on America’s half-century-long experiment in punishing the sick. A single-payer program is within reach. Even as their elected officials deny it, Americans demand it. In Health Justice Now, healthcare advocate and organizer Tim Faust shows the nuts and bolts of the current system—Who are the payers? Who are the providers? How are the rest of us lumped into risk pools? —can morph into a single-payer model that benefits us all. Once we’ve achieved single-payer healthcare, a whole world of progressive reforms becomes within reach.

TIMOTHY FAUST‘s writing has appeared in Splinter, Jacobin, and Vice, among others. He has worked as a data scientist in the healthcare industry, before which he enrolled people in ACA programs in Florida, Georgia, and Texas, where he saw both the shortcomings of the ACA and the consequences of
the Medicaid gap firsthand. Since 2017, he’s been driving around the United States in his 2002 Honda CR-V talking to people about health inequity in their neighborhoods. Timothy is also the general manager of Party World Rasslin', America's largest party wrestling promotion, in Austin, TX. He lives in Brooklyn.

Health Justice Now: Single Payer and What Comes Next (Paperback)