Join us for a reading and discussion featuring three poets, Judson Evans, Gale Batchelder, and Susan Berger-Jones, as they share their poetry collaboration "Chalk Song"

Imagine poetry as a chain of tool making, hand-to-hand, voice-to-voice. The poems in Chalk Song breach the membrane of the cave wall to trace the otherness of the human voice at the source of our linguistic imagination, from its first expression to the media of our post-modern world.

This is a brilliant collaboration, wherein these poets’ voices cross-pollinate, converge, and diverge to bring us sensibilities that accommodate the strangeness of Chauvet Cave. With each poem, Batchelder, Berger-Jones, and Evans take us deeper and deeper into the cave, while challenging our efforts to understand what Herzog calls “the first evidence of the modern human soul.” Just as these poets take us deeper into the world of the cave—the horse paintings, the bear skulls, the hand with the crooked finger—they just as easily give us passage out of that world, with unexpected, breathtaking imagery: “a new moon’s Motown,” a “flickering projectionist,” “the mandrake genome,” taking us deeper and deeper into unknowability.

- Duy Doan, author of We Play a Game, winner of Yale Series of Younger Poets Prize, 2018

Using Werner Herzog’s extraordinary documentary film, Cave of Forgotten Dreams, about the discovery of a cave full of Paleolithic art, three poets–Gale Batchelder, Susan Berger-Jones, and Judson Evans–decided to collaborate. Together and individually, they worked over time, with comments and revisions by the others, until the poems in Chalk Song began to take shape, the inimitable weaving together of three voices guided by sonic reverberations, time travel, and Frank O’Hara’s understanding of movies as that “glamorous country.”  This is an extraordinary book full of gorgeous music pulling you into its deep and fantastic crevices. Read Chalk Song and get lost on its many paths, where the “jars are on fire” and “you are the opposite of Orpheus.” 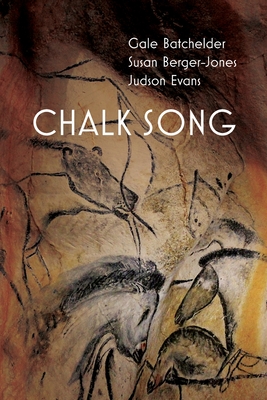