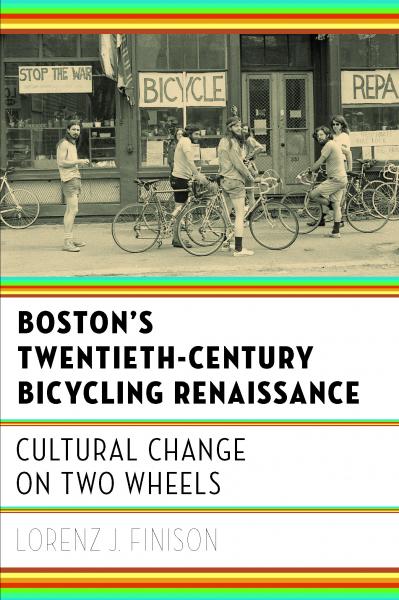 Boston’s Twentieth Century Bicycling Renaissance: Cultural Change on Two Wheels includes the history of racing, touring, commuting, bikeways, rails-to trails, bike messengers, bike-a-thons, BMX, bike building, bike shops, an amusing section on the ill-fated Tour de Trump, and many more. Author Lorenz Finison considers these topics through the lenses of race, class, gender, and LGBT issues in cycling and beyond. This book intertwines the history of cycling with a cultural history of Boston.

This is the second book in a trilogy. The first book: Boston’s Cycling Craze: 1880-1900, A Story of Race, Sport, and Society, achieved the Boston Globe’s best of New England nonfiction list in 2014.

Lorenz Finison is a social psychologist, public health practitioner, and historian. He arrived in Boston as a teenager in 1954 and feels privileged to write about a city he’s loved despite its warts and troubles, and its very real racial conflicts. He researches issues of race, class, and gender and how these factors influence such things as Who can ride with whom?  Who is included and who is excluded? Where? How dressed? At what speed? How safely for cyclists and other road users? Finison is a founding member of Cycling Through History, and of the Bicycling History Collections at UMass-Boston.