And They Knew Each Other: The End of Sexual Violence (Paperback) 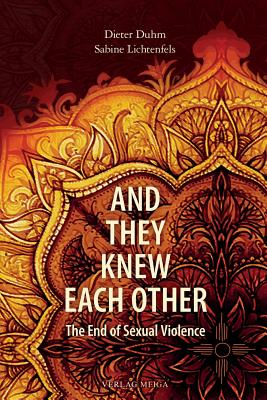 What would have happened if at that time in paradise Adam and Eve had been allowed to "know each other" instead of being punished and expelled for this wish? How different Genesis (the story of Creation) would have developed had it not started with the fall of man but with the love between man and woman?

This book circles around a new starting point for peace between the genders and from there proposes a new "genesis". The authors do not take just a theoretical standpoint but draw on more than 40 years of life experience and work as founders and members of a radical community project. They offer a new, multi-faceted paradigm of the relationship between men and women. With this new paradigm they turn the switch in the primary settings within the social structures of our time.

We know from chaos theory and research in other scientific areas that very small changes in an equation can lead to totally different final results. This is also true in the human milieu. If the paradigm presented in this book start to be accepted by more and more people, the evolution of mankind can change direction to develop into a deeply humane human being, who is able to access huge creativity in order to build a totally peaceful society. There will be no more losers, no suppression of other peoples, no cruelty against animals, no sexual violence, no fear, no wars.

The book is published at exactly the right time. The global war between the genders has reached a peak. The foundations of our societies are breaking. Our world has become leaderless and the consequences are hysteria, loss of orientation, blame and accusations of either secret or open violence.

It is right at this point where the book offers new information and patterns of interpretation. The authors do not aim to repair a broken system. They do not give advice as to how shattered relationships can be restored nor do they give manuals for a more satisfying sexual life. Instead they build, step by step, thought by thought, a new system.

They liberate the areas of love and sexuality from our capitalist thought system in which everything is reduced to the value of goods, degraded to a need must be satisfied. Instead they locate the core areas of our human existence in the universal and sacred matrix from which all life originates. They show that within this matrix life follows a different logic and ethics which humankind can start to learn again.

From this perspective the authors shed light into the different aspects of humanity's love life: into the history of patriarchy, into the collective trauma, into the problem of our love relationships, into the phenomena of jealousy and fear of loss, into the relationship between mother and son, daughter and father. They do not analyse what exists but rather lead their readers towards healing. They write about a new female consciousness, about the affirmation of our wild sexual nature, about a global uprising which will 'free love from the cross'. Tears of healing and insight will flow when men and women can recognize each other in the light cast by this book. A wave of relief will go around the planet as humankind regains a power which is stronger than violence. The way is free for a culture of partnership. From now on trust between humans and all fellow creatures is the ferment of life.