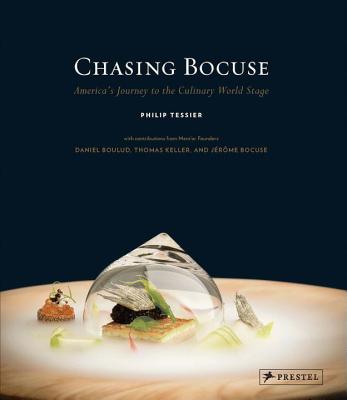 All proceeds from the book are donated to ment'or, the non profit Foundation that supports Team USA for the Bocuse d'Or

The dramatic story of the American team’s journey from obscurity to the silver-medal and ultimately the gold-medal win at the world’s most renowned cooking competition, the Bocuse d’Or, is told in riveting narrative, breathtaking photographs, and expert recipes from every stage of the process. In 2015 in Lyon, France, Team USA medaled for the first time ever at the Bocuse d’Or—often called the "Olympics of the cooking world"— taking silver. Two years later, Team USA won the competition and took home the gold. The coach and mentors of the 2015 team consisted of chefs who have become household names: Gavin Kaysen, Thomas Keller, and Daniel Boulud, with French Laundry executive sous chef Philip Tessier and his assistant Skylar Stover as the primary competitors. Now Tessier, who went on to coach the winning 2017 team, and his teammates offer readers a seat at the table of this exciting culinary event, founded by and named for famed chef Paul Bocuse, in a book brimming with personal anecdotes, vibrant pictures, and a course-by-course offering of recipes for the home chef from the competitions. As Tessier describes the journey to the competition—first as competitor, then as coach—including the chaos, pressure, and the glorious result, readers will feel every heated moment. With a collection of recipes for meals served at every stage, readers will be able to taste those moments as well. Rarely has food writing been so exciting—or so rewarding. Combining a great story with recipes crafted by America’s culinary giants, this beautiful celebration of a historic victory will make every reader feel and cook like a champion.

PHILIP TESSIER is the first American chef to ever place on the podium at the prestigious Bocuse d’Or culinary competition in Lyon, France, taking silver in 2015 competition. Chef Tessier continued on to coach the 2017 U.S. team, guiding them to victory as they won gold for the first time in the 30 year competition. He was previously executive sous chef at Thomas Keller’s three Michelin star The French Laundry in Napa Valley, CA, and chef de cuisine at Bouchon in Yountville, CA. He was part of the opening team of Per Se and was a sous chef at Le Bernardin, both three Michelin star restaurants based in New York City.

"Chasing Bocuse is a beautifully packaged book. Oversized pages with premium paper and pictures printed in bold ink to provide due service to the striking food. It’s an exceptional book from every perspective. And, it’s a book you can cook from. I can heartily recommend the Avocado Mousse." -Cooking by the Book


“Chasing Bocuse is an inspirational read, with lessons on hard work, perseverance and overcoming adversity that can be applied to all aspects of life, both in and out of the kitchen." -Frolic Hawaii