Unsinkable: Five Men and the Indomitable Run of the USS Plunkett (Hardcover) 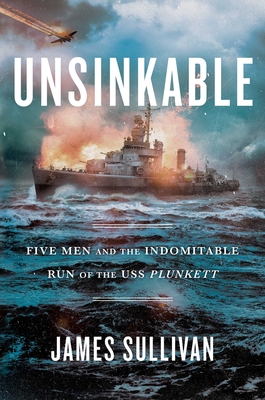 In the bestselling tradition of Indianapolis and In Harm’s Way comes a “captivating…gripping” (Kirkus Reviews, starred review) account of the USS Plunkett—a US Navy destroyer that sustained the most harrowing attack on any Navy ship by the Germans during World War II, later made famous by John Ford and Herman Wouk.

“A reflection on the nature of storytelling itself” (The Wall Street Journal), Unsinkable traces the individual journeys of five men on one ship from Casablanca in North Africa, to Sicily and Salerno in Italy and then on to Plunkett’s defining moment at Anzio, where a dozen-odd German bombers bore down on the ship in an assault so savage, so prolonged, and so deadly that one Navy commander was hard-pressed to think of another destroyer that had endured what Plunkett had. After a three-month overhaul and with a reputation rising as the “fightin’est ship” in the Navy, Plunkett (DD-431) plunged back into the war at Omaha Beach on D-Day, and again into battle during the invasion of Southern France—perhaps the only Navy ship to participate in every Allied invasion in the European theatre.

Featuring five incredibly brave men—the indomitable skipper, who will receive the Navy Cross; the gunnery officer, who bucks the captain every step of the way to Anzio; a first lieutenant, who’s desperate to get off the ship and into the Pacific; a seventeen-year-old water tender, who’s trying to hold onto his hometown girl against all odds, and another water tender, who mans a 20mm gun when under aerial assault—the dramatic story of each plays out on the decks of the Plunkett as the ship’s story escalates on the stage of the Mediterranean. Based on Navy logs, war diaries, action reports, letters, journals, memoirs, and dozens of interviews with the men who were on the ship and their families, Unsinkable is a timeless evocation of young men stepping up to the defining experience of their lives. “If you were moved by Norman Maclean’s A River Runs Through It, by William Kent Krueger’s This Tender Land…by the values we hold dear, decency, sacrifice, steadfastness, then Unsinkable will take you to a place long dead in your soul, and flood it with light” (Doug Stanton, #1 New York Times bestselling author of Horse Soldiers).

James Sullivan was born and raised in Quincy, Massachusetts, and has an MFA from the Iowa Writers’ Workshop. He has written for The New York Times and National Geographic Traveler, the magazine. He lives with his family outside Portland, Maine, 3.4 miles from the birthplace of film director John Ford, who steamed into Omaha Beach on Plunkett.

“Unsinkable, a fine narrative in its own right, is also a reflection on the nature of storytelling itself, as well as a valuable and entertaining contribution to the record... Mr. Sullivan takes pains to illuminate and honor a lost world.” —Wall Street Journal

“Accounts of self-sacrifice and devotion to duty, especially those rendered with humility, have lately been in short supply, and we need them... In telling this story, in locating members of Plunkett’s crew and coming to know them, Sullivan performs a kind of miracle.” —Boston Globe

“Captivating...Sullivan delivers a gripping account...a vivid portrait of the sailors, wives, girlfriends, and families and their world, in which the Plunkett’s battles often seem like interludes. As is typical in war, tedium was the norm, excitement came at rare intervals, and one horrendous incident ensured the ship’s place in history.” —Kirkus Reviews, STARRED review

“Sullivan recreates the heat and chaos of the crew’s epic struggles to keep the Plunkett afloat, fighting onboard fires and preventing detonation of depth charges and ammunition as the ship burned. Readers, especially those with command of naval terminology, can virtually become part of the crew’s frenzied reeling as they aided their injured, dying, and dead comrades and kept the Plunkett seaworthy.” —Booklist

"Sullivan gives voice to those lost to us now. More than merely reporting the grisly events and the heartbreaking tragedies, Sullivan captures the defining essence of something enduring but elusive. In grappling with the unspoken horros of war, Sullivan brings out a strength that sustains those willing to tap into it." —San Francisco Book Review

"Unsinkable reveals a great deal of military history, the ins and outs of strategy and battle details. But it also displays a deep reverence for World War II veterans through the personal stories of the five crew members who were mostly just kids. . . . The book bears witness to their sacrifice, devotion and duty." —Patriot Ledger

"James Sullivan captures the Plunkett's exploits and more. . . . Thinking back to former President Harry S. Truman's observation that the only thing new in the world is the history you have not read, the only thing newer comes in writings that peel back histories to remarkable new levels of detail." —Proceedings Magazine

“I wept at the end of this book, and I suspect you will, too. If you were moved by Norman Maclean’s A River Runs Through It, by William Kent Krueger’s This Tender Land, by Ernie Pyle’s writing of Americans at their best and worst— by the values we hold dear, decency, sacrifice, steadfastness, then Unsinkable will take you to a place long dead in your soul, and flood it with light.” —Doug Stanton, #1 New York Times bestselling author of Horse Soldiers

“James Sullivan’s Unsinkable is a wonderful achievement. Intimate, harrowing, thrilling, this epic of an incredible ship and five amazing men is unmissable. The finest seafaring tale from WW2 in a long while.” —Alex Kershaw, author of The Bedford Boys, The Longest Winter, and The First Wave

“At a time when stories of individual heroism are especially needed, James Sullivan brings us the riveting Unsinkable. Although the action unfolds aboard a destroyer, the focus is not on a ship, but on five uplifting individuals. Their courage in facing the enemy in Europe, culminating in the defense of their ship, the USS Plunkett (DD-431), from an attack by a dozen German bombers off Anzio, is matched by the personal issues they juggle while serving in a war zone. Sullivan ‘humanizes’ the war in this captivating piece of storytelling.” —John F. Wukovits, author of Hell from the Heavens

“This is an incredible story of courage, determination, and sheer guts in the heart of the second world war. A book that everyone should read!” —Admiral James Stavridis USN (Ret.), Supreme Allied Commander at NATO (2009-2013), dean, author of Sailing True North: Ten Admirals and the Voyage of Character