The City Of Pleasure: A Fantasia on Modern Themes (Golden Classics #88) (Paperback) 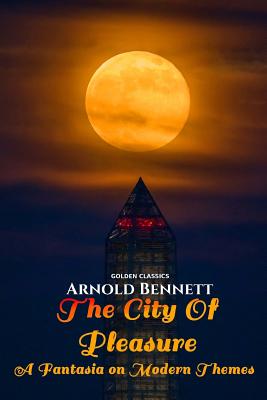 This is book number 88 in the Golden Classics series.

Classics for Your Collection: goo.gl/U80LCr --------- Enoch Arnold Bennett (27 May 1867 - 27 March 1931) was an English writer. He is best known as a novelist, but he also worked in other fields such as journalism, propaganda and film. Bennett was born in a modest house in Hanley in the Potteries district of Staffordshire. Hanley is one of a conurbation of six towns which were joined together at the beginning of the 20th century as Stoke-on-Trent. Enoch Bennett, his father, qualified as a solicitor in 1876, and the family moved to a larger house between Hanley and Burslem. Bennett was educated locally in Newcastle-under-Lyme. Bennett won a literary competition hosted by Tit-Bits magazine in 1889 and was encouraged to take up journalism full-time. In 1894, he became assistant editor of the periodical Woman. He noticed that the material offered by a syndicate to the magazine was not very good, so he wrote a serial which was bought by the syndicate for 75 (equivalent to 10,000 in 2015). He then wrote another. This became The Grand Babylon Hotel. Just over four years later, his first novel, A Man from the North, was published to critical acclaim and he became editor of the magazine. In 1903, he moved to Paris, where other great artists from around the world had converged on Montmartre and Montparnasse. Bennett spent the next eight years writing novels and plays One of His Quotes Any change, even a change for the better, is always accompanied by drawbacks and discomforts. Scroll Up and Grab Your Copy.