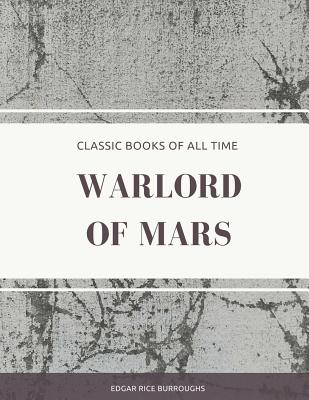 By Edgar Rice Burroughs
$8.79
Not currently in store. Available to ship from distributor's warehouse.
(This book cannot be returned.)

Warlord of Mars By Edgar Rice Burroughs
Old acquaintances, made in the two other stories, reappear: Tars Tarkas, Tardos Mors and others. There is a happy ending to the story in the union of the Warlord, the title conferred upon John Carter, with Dejah Thoris. ht be such as to strike very close to me or to my friends. I wished that I might have found a point closer to the two men from which to have heard their conversation; but it was out of the question now to attempt to cross the river, and so I lay quietly watching them, who would have given so much to have known how close I lay to them, and how easily they might have overcome and killed me with their superior force. Several times Thurid pointed across the river in my direction, but that his gestures had any reference to me I did not for a moment believe. Presently he and Matai Shang entered the latter's boat, which turned out into the river and, swinging round, forged steadily across in my direction. As they advanced I moved my boat farther and farther in beneath the overhanging wall, but at last it became evident that their craft was holding the same course. The five paddlers sent the larger boat ahead at a speed that taxed my energies to equal. Every instant I expected to feel my p