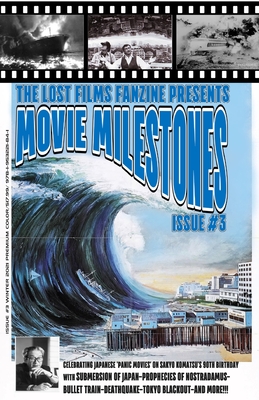 THE LOST FILMS FANZINE PRESENTS MOVIE MILESTONES #3, which celebrates Japanese 'Panic Movies' as made famous by SUBMERSION OF JAPAN (1973) on the 90th birthday of its creator, Sakyo Komatsu. All of Komatsu's Showa Era film adaptations (including 1974's ESPY) are covered including TV projects like THE MONKEY ARMY and the SUBMERSION OF JAPAN TV drama (both 1974-1975). Other 'Panic Movies', some of which are rarely seen in the west, are covered including THE FINAL WAR (1960), THE LAST WAR (1961), CONFLAGRATION (1975), THE BULLET TRAIN (1975), BLUE CHRISTMAS (1978), VIRUS (1980), DEATHQUAKE (1980) and TOKYO BLACKOUT (1987). This issue also covers one of the most famous banned/lost films of all time: 1974's PROPHECIES OF NOSTRADAMUS And this being a sister publication to THE LOST FILMS FANZINE, plenty of unmade movies like INTER ICE AGE 4 and AFTER JAPAN SINKS are covered as well, don't miss it