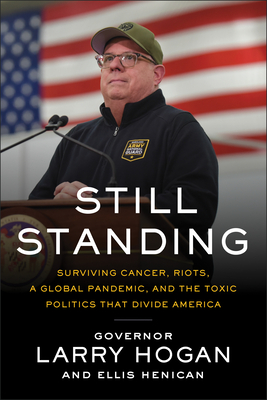 By Governor Larry Hogan, Ellis Henican
$26.95
Not currently in store. Available to ship from distributor's warehouse.

Still Standing reveals how an unlikely governor is sparking a whole new kind of politics--and introduces the exciting possibilities that lie ahead.

As the rookie Republican governor of deep-blue Maryland, Larry Hogan had already beaten some daunting odds. A common-sense businessman with a down-to-earth style, he had won a long-shot election the Washington Post called "a stunning upset." He'd worked with cops and neighborhood leaders to quell Baltimore's worst rioting in 47 years. He'd stared down entrenched political bosses to save his state from fiscal catastrophe, winning praise from Democrats, Republicans and independents.

But none of that prepared him for the life-threatening challenge he would have to face next: a highly aggressive form of late-stage cancer. Could America's most popular governor beat the odds again?

The people of Maryland, with their "Hogan Strong" wristbands, were certainly pulling for him, sending him back to the governor's office in a landslide. As Governor Hogan began his second term cancer-free, his next challenge went far beyond Maryland: bringing our divided country together for a better future. And in 2020, as the COVID-19 pandemic changed that future forever, Hogan was once again called to rely upon his bold, open-minded approach to problem-solving to lead and serve in a time of unprecedented turmoil.

In his own words and unique, plain-spoken style, Larry Hogan tells the feel-good story of a fresh American leader being touted as the "anti-Trump Republican." A lifelong uniter at a time of sharp divisions. A politician with practical solutions that take the best from all sides. An open-hearted man who has learned important lessons from his own struggles in life.

As we face a future full of questions, Hogan offers some surprising answers. Still Standing is a timely reminder that perseverance in the face of unexpected obstacles is at the heart of the American spirit.

Larry Hogan is the 62nd governor of Maryland and chairman of the National Governors Association. Recently reelected in a landslide, he is only the second Republican governor in Maryland history to win a second term. Known for his practical solutions, his stark transparency and his ability to work across party lines, he is also a proud survivor of late-stage non-Hodgins lymphoma. His wife, Yumi Hogan, is the first Korean-American first lady in America. The Hogans live in the historic state capital of Annapolis.