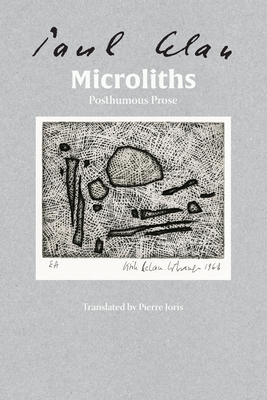 In the mid-fifties Paul Celan suggested that he had a mind for writing that "would be a bit more sober & more spacious" than his poems. And yet, in his life-time Celan published very little of such "more spacious" work -- i.e. prose -- except for two essays that were public award-acceptance speeches, and a few occasional bits and pieces often published, or better, hidden away in obscure places. It is only with this volume, edited by Barbara Wiedemann and Bertrand Badiou, that Celan's multifaceted achievements as a prose writer can be discovered.

For example, in the early language games of surrealist inspiration. In the biting, bitter aphorisms, "counterlights" thrown on those concrete dates from and toward which his poems are written -- since the early sixties we are dealing with texts that explicitly exhibit their contemporaneity. Or in the poetological critique of the prejudices with which the volumes of his poetry were read. Among the most surprising and appealing of these prose writings are the narratives, the "stories" and dialogues with the background of his Jewish fate.

This English version of Microliths follows the first German edition of 2005. The sole difference is in the final section, the commentaries, which is a shortened version of Wiedemann & Badiou's original commentary, with some additional material by Pierre Joris. The translator, who this year concludes a 52-year involvement with bringing Celan's oeuvre into English, & the publisher are honored to release this book -- the only major collection of Paul Celan's prose -- in 2020, his 100th birth- & 50th death-year.