Days of Valor: An Inside Account of the Bloodiest Six Months of the Vietnam War (Paperback) 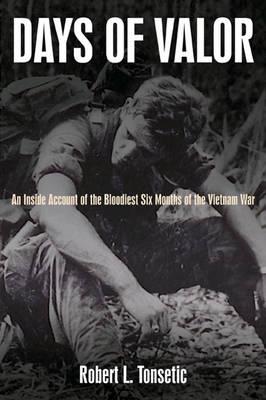 The 199th Light Infantry Brigade was created from three U.S. infantry battalions of long lineage as a fast reaction force to place in Vietnam. As the book begins, in December 1967, the brigade has been at war for a year, and many of its battered 12-month men are returning home. The Communists seem to be in a lull, and the brigade commander requests a transfer to a more active sector, just above Saigon. Through January the battalions sense increasing enemy strength, NVA personnel now mixed with Viet Cong units. But the enemy is lying low, and a truce has even been declared for the Vietnamese New Year, the holiday called Tet. On January 30, 1968, the storm broke loose, as Saigon and nearly every provincial capital was overrun by VC and NVA bursting in unexpected strength from their base camps. In this book we learn the most intimate details of combat, as the Communists fight with rockets, mortars, Chinese claymores, mines, machine guns and AK-47s. The battles evolve into an enemy favoring the cloak of night, the jungle--both urban and natural--and subterranean fortifications, against U.S. forces favoring direct confrontational battle supported by air and artillery. When the lines are only 25 yards apart, however, there is little way to distinguish between the firepower or courage of the assailants and the defenders, or even who is who at any given moment, as both sides have the other in direct sight. Days of Valor covers the height of the Vietnam War, from the nervous period just before Tet, through the defeat of that offensive, to the highly underwritten yet equally bloody NVA counteroffensive launched in May 1968. It ends with a brief note about the 199th LIB being deactivated in spring 1970, furling its colors after suffering 753 dead and some 5,000 wounded. The brigade had only been a temporary creation, intended for one purpose, and though its heroism is now a matter of history, it should remain a source of pride for all Americans.