She Found it at the Movies: Women Writers on Sex, Desire and Cinema (Paperback) 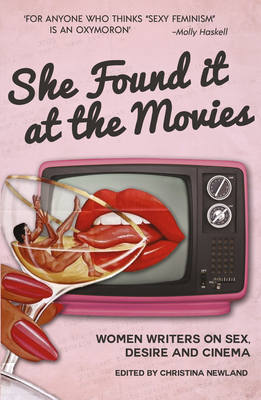 By Christina Newland (Editor)
$16.99
Not currently in store. Available to ship from distributor's warehouse.

Because Timothee Chalamet’s eyes gleam with the light of a thousand suns. Because you’d let Zoë Kravitz get away with putting gum in your hair. And because there really should be a national monument dedicated to Gene Kelly’s ass. From the tongue-in-cheek to the righteously enraged, She Found it at the Movies explores women’s secret desires, teen crushes, and one-sided movie star love affairs, flipping the switch on a century of cinema’s male-gaze domination. With misogyny and sexism still taking center stage in the real world—what can women’s relationships with movies tell us about the wider landscape of sexuality, politics and culture? Featuring writers you know and love from Buzzfeed, The Guardian, and Vulture, these essays pose thoughtful questions about sex and fantasy at the cinema. Like a guilt-free chat with your smartest girlfriends, this book is a positive celebration of female sexuality at its thirstiest.

Christina Newland is an award-winning journalist with bylines at Sight & Sound Magazine, Little White Lies, VICE, Hazlitt, The Ringer, and others. She has written on a variety of subjects, including culture, fashion, history, and sport, but is best known as a film critic and writer with specialist knowledge of American film history. In her writing, she has shown a consistent interest boxing and the boxing film. In addition, she writes longform biography on figures of cultural significance, from forgotten female movie producers to gypsy prizefighters during the Second World War. In 2015, Christina was awarded the Intellect Books (Masoud Yadzani) Award for Excellence in Film Scholarship. She also contributes a monthly print column on film & fashion to Little White Lies Magazine. She tweets at @christinalefou and you can find her work at www.thebetamaxrevolt.com.

‘At its best, a book of fiercely original writing and thinking, not only about cinema, but about ourselves.’ --MARK COUSINS (Writer and filmmaker)

‘She Found it at the Movies collapses the space between screen and body and foregrounds the reality of our very complex and always present bodies. While that space has long been dominated by so-called objectivity and clinical analysis, this collection dives into uncharted waters to explore, creating space for discussing desire instead of repressing it.’ --KIVA REARDON (Editor in Chief of Cleo Film Journal and film programmer at the Toronto International Film Festival)

‘She Found it at the Movies gives film criticism the vitamin-boost it needed, a female gaze bringing eroticism, sensuality and a new subversive intimacy to the critical act; the book celebrates not just desire but pleasure. Each of these essays is a seduction, leading you astray to the great seduction of the movies themselves.’ --PETER BRADSHAW, Film Critic at The Guardian

"For anyone who thinks “sexy feminism” is an oxymoron" —Molly Haskell, Film critic and author

"A seduction" —Peter Bradshaw, The Guardian