Oh Cook!: 60 easy recipes that any idiot can make (Hardcover) 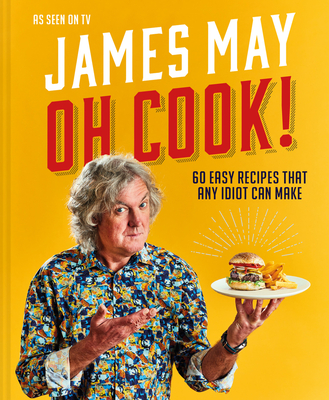 The cookbook that, finally, drives a blunt meat skewer through the burgeoning pseudo-intellectualism of foodie media, this is a foolproof manual packed with practical information and delicious recipes for even the most basic of home cooks. After years of shirking from his culinary duties, James is on a mission to educate himself about the world of food. In this TV tie-in, he seeks to unpack the mysteries of the industry from kitchen basics to haute cuisine, covering everything from poaching eggs to preparing the perfect Sunday roast. Gathering recipes and expert advice from celebrity chefs along the way, James discovers just what it takes to put together a cracking cookbook, from recipe testing to photography and everything in between.

James May is a well-known writer, broadcaster, and co-presenter of the television series The Grand Tour for Amazon Video. James enjoys cars, motorcycles, light aircraft, and a drink, always in that order. He lives in London with Fusker, the world's most unpleasant cat.

James was one-third of one of the most successful television programs of all time, BBC's Top Gear. He has presented many solo projects: Toy Stories, BBC2's five-part series with annual specials; James May's Man Lab, which ran for 3 series; and James May's Cars of the People, which he created, wrote, and presented. Other projects have taken him to the edge of space, forced him to share a caravan with wine writer Oz Clarke, and seen him attempt to fly with a jet pack on his back. James has just finished filming Our Man in Japan, a 6-part travelogue to be released in early 2020.