The Rifles Are There: 1st and 2nd Battalions, the Royal Ulster Rifles in the Second World War (Hardcover) 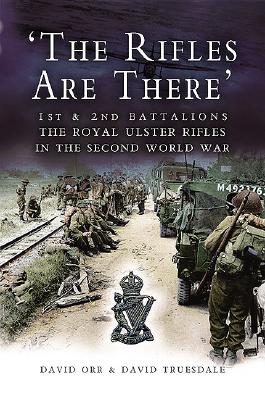 By David Orr, David Truesdale
Out of Print

The two Royal Ulster Rifles battalions were fierce rivals but both had cause to be proud of themselves and the other. The 1st Battalion was in India at the outbreak of war whereas the 2nd Battalion distinguished itself before and during the Dunkirk evacuation. (Montgomery is credited with saying 'it's alright then - the Rifles are there'.) After arduous training, both battalions landed in Normandy on D Day: the 1st by gliders as part of 6th Airlanding Brigade and the 2nd with 9th Brigade, 3rd Division on Sword Beach. They were only the only British regiment to be represented on D Day by both regular battalions.

The authoritative work goes on to describe the long slog to Germany including winter action during the surprise German Bulge counter-offensive and the massive Rhine crossing operation (VARSITY). As numerous RUR members were in 9th Parachute Battalion, there is a full description of the legendary seizing of the mighty Merville Battery.