The Egyptian Campaign, 1882 & the Mahdist Campaigns, Sudan 1884-98 Two Books in One Edition: The British Army at War in North Africa During the 19th C (Hardcover) 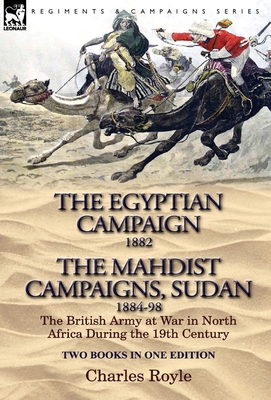 By Charles Royle
Email orders@tridentbookscafe.com or call for price

The British Empire at war in the deserts of Egypt and the Sudan This special Leonaur edition combines into a single volume two works concerning the campaigns of the British Army in Egypt and the Sudan during the later Victorian era. The text is supported by maps sometimes absent in other editions of the text. The first work concerns the Egyptian Campaign of 1882, sometimes referred to as the Anglo-Egyptian (or Second Anglo-Egyptian) War. The motivation for the conflict arose from a military coup by Egyptian army officers against the Khedive, in the form of Tewfik Pasha, which led the British to believe their own essential interests in the region would be destabilised. In response a substantial naval and military force was despatched which resulted in the bombardment of Alexandria. The British army under Wolseley marched on Cairo and won a decisive victory at the Battle of Tel-el-Kabir which led to a period of occupation of the country. The second work in this substantial book concerns the various campaigns against the Mahdists of the Sudan from 1884 to their final defeat at Omdurman in 1898. This is well known period of British imperial history. Even casual students of the period are aware of the rise of the Mahdist movement, the siege of Khartoum held by the enigmatic General 'Chinese' Gordon, the slaughter of Hicks Pasha and his army, the abortive race to relieve Gordon and monumental battles such as El-Teb, Tamai, Abu Klea and Atbara. These were iconic times for the British Empire when 'the Gatling jammed and the colonel was dead' and the ferocious 'fuzzy wuzzy's' achieved the unthinkable and broke the British infantry square. Two excellent histories and highly recommended.
Leonaur editions are newly typeset and are not facsimiles; each title is available in softcover and hardback with dustjacket.