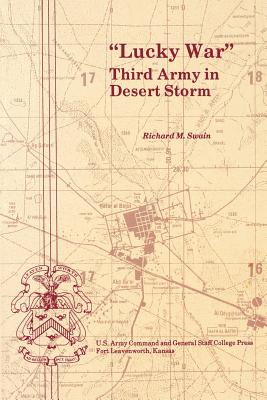 By Richard M. Swain, Roger J. Spiller (Foreword by), Combat Studies Institute U. S. Army
Not currently in store. Available to ship from distributor's warehouse.
(This book cannot be returned.)

There is a crossroads near Safwan in southeastern Iraq. Nearby, there is a small hill and an airstrip. After the Gulf War, Safwan became a gathering point for refugees fleeing the Iraqi Army as it reestablished control of Basrah. Prior to that, the airstrip was the site of the dictation of armistice terms to that army by the victorious coalition's military high command. Still earlier, at the end of the coalition attack, the absence of American forces on the airstrip and at the road junction was the source of the most serious command crisis of the U.S. expeditionary forces. Its resolution put at risk American soldiers and threatened the reputations of the very commanders who had just conducted the greatest offensive of concentrated armored forces in the history of the United States Army. In many ways, events at Safwan in late February and early March are emblematic of the Gulf War. It is to explain how U.S. forces arrived at Safwan, what they did and did not do there, and what this all meant, that this book is written. The Gulf War was an undoubted success. It was also a war of clear, sharp contrasts. Saddam Hussein's rape of Kuwait was an obvious wrong that begged for setting right. Saddam's stranglehold on much of the world's proven oil reserves presented a clear and present danger to Western interests, and his wanton attack on Kuwait posed a clear threat to his Arab brothers. Moreover, Saddam's own ineptness in dealing with the crisis ensured the unity of the global community against him unless the diplomatic effort to resolve the situation was seriously mishandled. It was altogether a war of the old comfortable sort-good against evil, a wrong to be righted-a crusade. It was for all that a difficult strategic and operational challenge for the American armed forces, which at first found themselves badly out of position. Though freed of the Soviet threat, U.S. forces were still deployed along the inter-German border and, half a world away, in the continental United States. Saddam was able to snap up Kuwait before Western military forces could intervene. In early August 1990, there was much to be done and precious little time in which to do it. It was a long road to the greatly unbalanced victory on the last day of February in 1991. The purpose of this book is to provide an account, from the point of view of the U.S. Army forces employed, of the 1990-91 Persian Gulf War, from the Iraqi invasion of Kuwait to the withdrawal of coalition forces from southeastern Iraq. Like all contemporary history, this is written in one respect to provide work for revisionists. That is to say, it is written from the evidence at hand and from the author's observations as the Third Army historian. This book's focus is on the Army's part in this war, particularly the activities of the Headquarters, Third Army, and the Army Forces Central Command (ARCENT). It looks especially at the activities of the VII Corps, which executed ARCENT's main effort in the theater ground force schwerpunkt-General Schwarzkopf's "Great Wheel." The book is titled "Lucky War" after the affectation of Third Army, whose telephone switch, as far back as General George Patton's World War II headquarters, has been named "Lucky." In the same fashion, the Third Army's tactical operations center in Desert Storm was referred to as "Lucky TOC." Its forward command post was "Lucky Wheels," and so on. "Lucky" is a talisman to Third Army as, incidentally, are "Jay Hawk" to VII Corps, and "Danger" to the 1st Infantry Division. It is for that reason alone that "Lucky" is incorporated in the title.