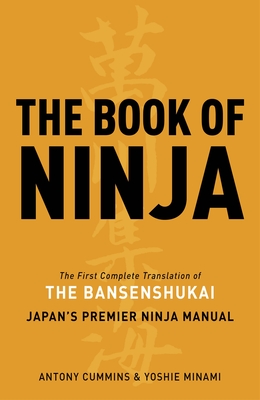 By Antony Cummins, Yoshie Minami
$35.00
Not currently in store. Available to ship from distributor's warehouse.

The first complete translation of the ultimate Ninja manual—a comprehensive guide to the arts of the ninja, including espionage, warfare, assassination, and more

In 1676, a ninja named Fujibayashi collected and combined information from the ninja clans of Iga—regarded to be the homeland of the ninja—and compiled it into an authoritative book. Known as The Bansenhukai, Fujibayashi's book has now been translated into English by the Historical Ninjutsu Research Team and is widely considered to be the ‘bible’ of ninjutsu, the arts of the ninja.

The Book of Ninja begins with an in-depth introduction to the history of Fujibayashi's scripture. The teachings themselves, appealingly rendered in this translation, then take us into the secrets of guerrilla warfare and espionage. We learn how to become the ultimate spy, whether through a network of spies or by hiding in plain sight. Through the stealth and concealment tactics of night-time infiltration, through weapon and tool building skills, and through mission planning, we can learn much both about warfare and about adopting the right mindset for tackling our own inner and outer enemies. Adding to the mix for the spycraft lover, there are sections on capturing criminals, performing night raids, making secret codes and signs, and even techniques for predicting the weather, and using an esoteric Buddhist system of divination. An exciting and engaging tome of lost knowledge, The Book of Ninja is the final say in the world of the ninja and the ultimate classic for samurai and ninja enthusiasts alike.

Antony Cummins holds an undergraduate degree in Ancient History & Archaeology and a master's degree in Neolithic Archaeology. In addition to working as a ninjutsu consultant for documentaries and other researchers, he has co-hosted television programs dedicated to the ninja. His previous works include In Search of the Ninja, True Path of the Ninja, The Secret Traditions of the Sinobi, and the Illustrated Guide to Viking Martial Arts. He splits his time between Manchester, England and Japan.

Yoshie Minami earned a bachelor's degree in Linguistics from the International Christian University and has worked as a consultant for television documentaries about the ninja. As a translator, she has published True English (2009) and The True Path of the Ninja (2011). She lives in Saitama, Japan.