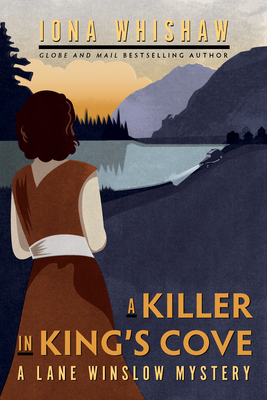 This is book number 1 in the Lane Winslow Mystery series.

It is 1946, and war-weary young ex-intelligence officer Lane Winslow leaves London to look for a fresh start. When she finds herself happily settled in King's Cove, a sleepy hamlet nestled in the idyllic interior of British Columbia surrounded by a suitably eclectic cast of small-town characters she feels like she may finally be able to put her past to rest.

But then a body is discovered, the victim of murder, and although she works alongside the town's inspectors Darling and Ames to discover who might possibly have motivation to kill, she casts doubt on herself. As the investigation reveals facts that she has desperately tried to keep a secret, it threatens to pull her into a vortex of even greater losses than the ones she has already endured.

A clever postwar mystery that will appeal to fan of historical mysteries with women sleuths like the Maisie Dobbs series by Jacqueline Winspear or the Bess Crawford series by Charles Todd.

Iona Whishaw is a former educator and social worker whose mother and grandfather both worked as spies in wars. She lives in Vancouver, British Columbia, with her husband.