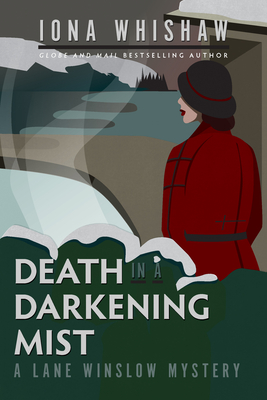 This is book number 2 in the Lane Winslow Mystery series.

With its intelligent protagonist, believable characters, effortless dialogue, and intriguing plot-all set against a gorgeous mountain backdrop-this second installment in a clever and charming postwar mystery series will captivate fans of the Maisie Dobbs or Bess Crawford books while winning over new devotees to this popular genre.

On a snowy day in December 1946, Lane Winslow--a former British intelligence agent who's escaped to the rural Canadian community of King's Cove in pursuit of a tranquil life--is introduced to the local hot springs. While there, she is astonished to overhear nearby patrons speaking Russian. When one of the speakers is found dead in the change room, Lane's linguistic and intelligence experience is of immeasurable value to the local police force in solving the murder.

The investigation points to the Soviet Union, where Stalin's purges are eliminating enemies, and the reach of Stalin's agent snakes all the way into a harmless Doukhobor community. Her complicated relationship with the local police inspector, Darling, is intensified by the perils of the case--and by the discovery of her own father's death during the war.

The case comes to a frantic and shocking end with a perilous nighttime journey along treacherous snow-covered roads.

Iona Wishaw is a former educator and social worker whose mother and grandfather both worked as spies in wars. She lives in Vancouver, British Columbia, with her husband.