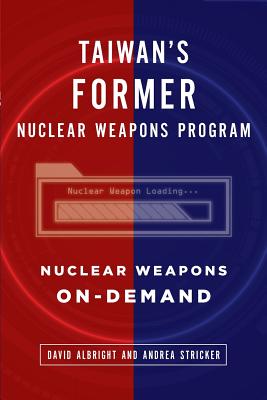 By Andrea Stricker, David Albright
$18.84
Not currently in store. Available to ship from distributor's warehouse.
(This book cannot be returned.)

Thirty years ago, in 1988, the United States secretly moved to end once and for all Taiwan's nuclear weapons program, just as it was nearing the point of being able to rapidly break out to build nuclear weapons. Because intense secrecy has followed Taiwan's nuclear weapons program and its demise, this book is the first account of that program's history and dismantlement. Taiwan's nuclear weapons program made more progress and was working on much more sophisticated nuclear weapons than publicly recognized. It came dangerously close to fruition. Taipei excelled at the misuse of civilian nuclear programs to seek nuclear weapons and implemented capabilities to significantly reduce the time needed to build them, following a decision to do so. Despite Taiwan's efforts to hide these activities, the United States was able to gather incriminating evidence that allowed it to act, effectively denuclearizing a dangerous, destabilizing program, that if left unchecked, could have set up a potentially disastrous confrontation with the People's Republic of China (PRC). The Taiwan case is rich in findings for addressing today's nuclear proliferation challenges.