In Tune With the Infinite: Fullness of Peace, Power, and Plenty (Paperback) 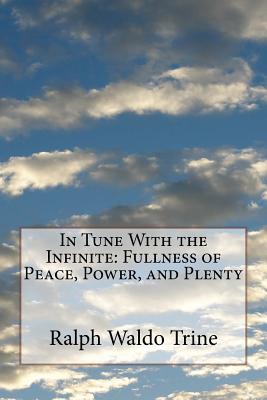 THERE is a golden thread that runs through every religion in the world. There is a golden thread that runs through the lives and the teachings to all the prophets, seers, sages, and saviors in the world's history, through the lives of all men of truly great and lasting power. All that they have ever done or attained to has been done in full accordance with law. What one has done, all may do. This same golden thread must enter into the lives of all who today, in this busy work-a-day world of ours, would exchange impotence for power, weakness and suffering for abounding health and strength pain and unrest for perfect peace, poverty of whatever nature for fullness and plenty. Each is building their own world. We both build from within and we attract from without. Thought is the force with which we build, for thoughts are forces. Like builds like and like attracts like. In the degree that thought is spiritualized does it become more subtle and powerful in its workings. This spiritualizing is in accordance with law and is within the power of all. Everything is first worked out in the unseen before it is manifested in the seen, in the ideal before it is realized in the real, in the spiritual before it shows forth in the material. The realm of the unseen is the realm of cause. The realm of the seen is the realm of effect. The nature of effect is always determined and conditioned by the nature of its cause. To point out the great facts in connection with, and the great laws underlying the workings of the interior, spiritual, thought forces, to point them out so simply and so clearly that even a child can understand, is the author's aim. To point them out so simply and so clearly that all can grasp them, that all can take them and infuse them into everyday life, so as to mold it in all its details in accordance with what they would have it, is his purpose That life can be thus molded by them is not a matter of mere speculation or theory with him, but a matter of positive knowledge. There is a divine sequence running throughout the universe. Within and above and below the human will incessantly works the Divine will. To come into harmony with it and thereby with all the higher laws and forces, to come then into league and to work in conjunction with them, in order that they can work in league and in conjunction with us, is to come into the chain of this wonderful sequence. This is the secret of all success. This is to come into the possession of unknown riches, into the realization of undreamed-of powers. Ralph Waldo Trine Within yourself lies the cause of whatever enters into your life. To come into the full realization of your own awakened inner powers is to be able to condition your life in exact accord with what you would have it.