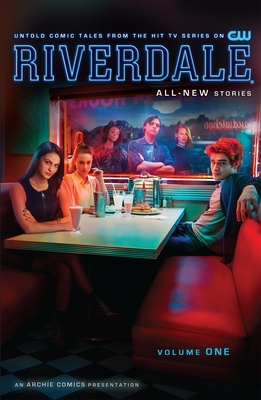 From Roberto Aguirre-Sacasa and the writers of the CW's Riverdale comes the first collection of the comic book set in the universe of the TV series. RIVERDALE VOL. 1 offers a bold, subversive take on Archie, Betty, Veronica, Josie & the Pussycats and their friends, exploring small-town life and the darkness bubbling beneath Riverdale's wholesome facade.

Learn the secrets and hidden tales from the summer before the eternal love-triangle begins. Featuring four stories focusing on the major players and events in the Riverdale series: Spend some time at Archie's summer construction job and learn how it leads him to a fateful encounter with the alluring music teacher, Ms. Grundy. Discover the truth about Betty's Los Angeles romance. Find out more about Veronica's mysterious life in New York, before the shocking event that would send her family scrambling. And meanwhile, there's Jughead, on the fringes of Riverdale, a witness to the terrible event that sets everything in motion: A tragedy that befalls Jason Blossom. You dare not miss this collection, written by Roberto Aguirre-Sacasa (Afterlife with Archie, Chilling Adventures of Sabrina) and the writers of the CW Riverdale series, with stunning art by Alitha Martinez (Black Panther: World of Wakanda)!

ROBERTO AGUIRRE-SACASA is an award-winning playwright, screenwriter, and comic book writer. In television, he was a writer on the HBO series BIG LOVE for three years, and is currently a writer/producer on GLEE. For Marvel Comics, he has written SPIDER-MAN, NIGHTCRAWLER, THE FANTASTIC FOUR (winning a Harvey Award for MK 4), and many others, and also adapted Stephen King's epic novel THE STAND into a best-selling 30-issue series. His accomplishments in the theater world include over fifteen plays produced around the world; on Broadway, he was part of the team brought on to revamp SPIDER-MAN: TURN OFF THE DARK. For film, he has written the new 2013 CARRIE, based on the Brian DePalma classic, and a remake of the cult classic THE TOWN THAT DREADED SUNDOWN, both for MGM. For Warner Brothers, he has written a new version of the horror musical LITTLE SHOP OF HORRORS and the live-action adaptation of ARCHIE -- CW's RIVERDALE.