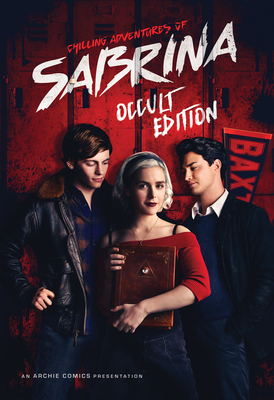 By Roberto Aguirre-Sacasa, Robert Hack (Illustrator)
$29.99
On Our Shelves Now

From the author of the New York Times best-selling graphic novel Afterlife with Archie: Escape from Riverdale comes the horror sensation Chilling Adventures of Sabrina. This title contains Roberto Aguirre-Sacasa's story so far, in addition to never-before-seen comic items and imagery from the Netflix series in a premium, over-sized hardcover format.

Terror is born anew in this dark reimagining of Sabrina the Teenage Witch's origin, an occult coming-of-age thriller!

On the eve of her sixteenth birthday, the young sorceress finds herself at a crossroads, having to choose between an unearthly destiny and her mortal boyfriend, Harvey. But a foe from her family's past has arrived in Greendale, Madame Satan, and she has her own deadly agenda.

ROBERTO AGUIRRE-SACASA is an award-winning playwright, screenwriter, and comic book writer. For Marvel Comics, he has written SPIDER-MAN, NIGHTCRAWLER, THE FANTASTIC FOUR (winning a Harvey Award for MK 4), and many others, and also adapted Stephen King's epic novel THE STAND into a best-selling 30-issue series. His accomplishments in the theater world include over fifteen plays produced around the world; on Broadway, he was part of the team brought on to revamp SPIDER-MAN: TURN OFF THE DARK. For film, he has written the new 2013 CARRIE, based on the Brian DePalma classic, and a remake of the cult classic THE TOWN THAT DREADED SUNDOWN, both for MGM. For Warner Brothers, he has written a new version of the horror musical LITTLE SHOP OF HORRORS and the live-action adaptation of ARCHIE.

Robert Hack is a comic book artist and illustrator based in Pennsylvania. He is the cover artist for IDW's Doctor Who series and has worked on Life with Archie, Afterlife with Archie and New Crusaders for Archie Comics.

"It's supernatural suspense at its best, and of course Robert Hack's wonderfully creepy art is a perfect match." — io9

“Another brilliant addition to the Archie Horror label.” — SCREAM MAGAZINE

“Bloody, atmospheric, and unnerving, Sabrina has it all for horror fans.” — UPROXX

"Blends bobbysocks and sacrifices, school plays and immortal witchcraft, in ways that are both chilling and relatable." — TEEN VOGUE

"Aguirre-Sacasa and Hack's reimagination of Sabrina as a mix of Lovecraftian horror and '50s teen drama fits the bill." — COMICS ALLIANCE

"A must-read for horror fans and old-time fans of the character." — BLASTR

"A welcome return for Chilling Adventures of Sabrina and one that packs a serious punch." — HORROR TALK

"A masterful understanding of both character and atmosphere." — PANELS