The Body in the Garden: A Lily Adler Mystery (LILY ADLER MYSTERY, A #1) (Hardcover) 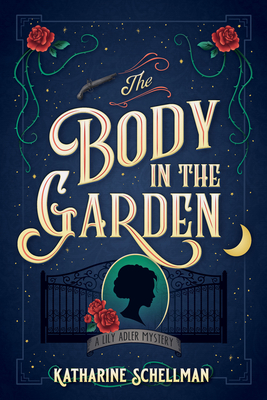 This is book number 1 in the LILY ADLER MYSTERY, A series.

A SUSPENSE MAGAZINE BEST BOOK OF 2020

Perfect for fans of Tasha Alexander and Rhys Bowen, Katharine Schellman's debut novel is sure to delight.

London 1815. Though newly-widowed Lily Adler is returning to a society that frowns on independent women, she is determined to create a meaningful life for herself even without a husband. She's no stranger to the glittering world of London's upper crust. At a ball thrown by her oldest friend, Lady Walter, she expects the scandal, gossip, and secrets. What she doesn't expect is the dead body in Lady Walter's garden.

Lily overheard the man just minutes before he was shot: young, desperate, and attempting blackmail. But she's willing to leave the matter to the local constables--until Lord Walter bribes the investigating magistrate to drop the case. Stunned and confused, Lily realizes she's the only one with the key to catching the killer.

Aided by a roguish navy captain and a mysterious heiress from the West Indies, Lily sets out to discover whether her friend's husband is mixed up in blackmail and murder. The unlikely team tries to conceal their investigation behind the whirl of London's social season, but the dead man knew secrets about people with power. Secrets that they would kill to keep hidden. Now, Lily will have to uncover the truth, before she becomes the murderer's next target.

Katharine Schellman studied theatre and history at the College of William & Mary, after which she went on to dance professionally, marry her college sweetheart, and collect addresses up and down the east coast of the United States. The Body in the Garden is her debut novel, though she has previously published a variety of short fiction and essays. Katharine currently lives and writes in the mountains of Virginia, and she is still recovering from that time she worked in political consulting.

Praise for The Body in the Garden:

A SUSPENSE MAGAZINE BEST BOOK OF 2020

“[An] enjoyable debut...Schellman’s colorful detective trio and skillful use of historical fact will appeal to fans of Catherine Lloyd.”
—Publishers Weekly

"The mixed-race identities of her partners in crime solving and the methods through which they navigate London society add richness to the tale beyond mere Regency-era tropes...Pleasant."
—Booklist

"Katharine Schellman’s 1815-set debut has all the glittering trappings of the era, while examining the privilege and racism at its core."
—BookPage

"Schellman throws in several twists and turns and suspicions move from one character to another... The Body in the Garden has a good story, is well researched, and employs good writing."
—New York Journal of Books

“If you need a truly enjoyable start to a new historical murder mystery series, this is your book. Also, the audiobook has a lovely voiced British-born narrator, Henrietta Meire, so highly recommend that format. I can’t wait for the next mystery!”
—BookRiot, Unusual Suspects Newsletter

"A perfect London crime novel and a masterful debut; fast-paced, expertly researched, and intricately plotted. I actually gasped when I got to the end!
—Alex Grecian, New York Times bestselling author of The Saint of Wolves and Butchers

"Clever and satisfying, this debut novel delivers characters that draw you in and plot twists that keep you guessing. Fans of Tasha Alexander's Lady Emily mysteries will want to set aside space on their bookshelves for the adventures of widowed amateur sleuth Lily Adler."
—Greer Macallister, bestselling author of The Magician's Lie and Woman 99