Hunting the Caliphate: America's War on ISIS and the Dawn of the Strike Cell (Hardcover) 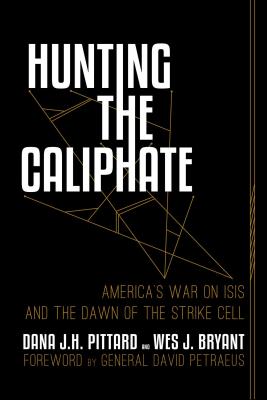 As seen on Fox News!

See America’s campaign against ISIS through the eyes of the men on the ground.

In this vivid first-person narrative, a Special Operations Joint Terminal Attack Controller (JTAC) and his commanding general give fascinating and detailed accounts of America’s fight against one of the most barbaric insurgencies the world has ever seen.

In the summer of 2014, three years after America’s full troop withdrawal from the Iraq War, President Barack Obama authorized a small task force to push back into Baghdad. Their mission: Protect the Iraqi capital and U.S. embassy from a rapidly emerging terrorist threat.

A plague of brutality, that would come to be known as ISIS, had created a foothold in northwest Iraq and northeast Syria. It had declared itself a Caliphate—an independent nation-state administered by an extreme and cruel form of Islamic law—and was spreading like a newly evolved virus. Soon, a massive and devastating U.S. military response had unfolded.

Hear the ground truth on the senior military and political interactions that shaped America’s war against ISIS, a war unprecedented in both its methodology and its application of modern military technology. Enter the world of the Strike Cell, secretive operations centers where America’s greatest enemies are hunted and killed day and night. Plunge into the realm of the Special Operations JTAC, American warfighters with the highest enemy kill counts on the battlefield. And gain the wisdom of a cumulative half-century of military experience as Dana Pittard and Wes Bryant lay out the path to a sustained victory over ISIS.

For more information about the book, visit www.huntingthecaliphate.com.

Dana J. H. Pittard retired from the U.S. Army in 2015 at the rank of Major General after 34 years of active duty service. He was a highly decorated combat leader and commanded units at every echelon from platoon to division, including multiple combat tours in Iraq and the Middle East. In 2014, he was picked to lead the initial U.S. response to halt the aggressive spread of ISIS in Iraq. Dana, a West Point graduate and Harvard fellow, is a vice president with a manufacturing company in Indiana. He currently lives with his wife Lucille in the Indianapolis area.

Wes Bryant is a former Special Operations Forces Tactical Air Control Party - Joint Terminal Attack Controller (SOF TACP - JTAC), a member of the elite ground combat forces of the U.S. Air Force who serve as combat airpower specialists for America's special operations units. In 2014, as the senior enlisted JTAC to establish the Baghdad Strike Cell, he coordinated and controlled some of the first airstrikes of America’s war on ISIS. Later, he was the senior airpower expert for special operations task forces hunting ISIS throughout Syria and Afghanistan until his retirement in 2018. Wes holds a Bachelor’s in Asian Studies and currently pursues writing, editing, and consulting while teaching traditional Kung Fu. He lives with his wife and daughters in North Carolina.

"With the complementary insights of a general and his senior enlisted man, along with an insider's eye for detail and an unshakeable belief in their mission, Pittard and Bryant expertly pull back the curtain on the front line fight against ISIS. From Iraq to Afghanistan and Syria, Pittard and Bryant describe the development of a devastating air campaign waged from a distance, where rapid life or death decisions must be made with limited information and murky rules of engagement, and where ultimate success hinges on coordination between a state-of-the-art operations center with a small group of highly-trained Americans led by Pittard and Bryant, and their indigenous allies battling ISIS on the ground. Eye-opening, candid, and at times deeply human, Hunting the Caliphate is a must read for understanding a new kind of war told by two men who not only fought that war, but helped define it."
— David Broyles, former USAF Pararescueman (PJ) and co-creator of History Channel's combat drama, SIX

"From mass executions to pinpoint air strikes, political and military frustrations, and the politics of coalition warfare, Hunting the Caliphate is a compelling blend of military history and first-person memories of the war against terror—the complex battlefield, the joys of victory, the tragedy of loss and the sacrifice of the men and women who carried out the mission. An insider account from a senior Army ground commander and a front line battlefield airman, the book is a gritty, compelling read for all who hope to understand America’s longest war."
— Deborah Lee James, 23rd Secretary of the Air Force, author of Aim High: Chart Your Course and Find Success

“Simply excellent. Hunting the Caliphate is the first account to give sustained insights into the events and personalities shaping the war on ISIS that academics and journalists have been unable to capture except in snapshots. Effectively written, and with editing nothing short of first-rate, it is a descriptive and gripping narrative from two contrasting yet intersecting perspectives that offers readers a broader view of the US military campaign against ISIS. As a historian of modern combat operations, I applaud the insightful observations appearing throughout that serve to accurately convey an important history—and dispel its myths.”
— Mark J. Reardon, Senior Historian, US Army Center of Military History

"Providing an in-depth view into the worlds of military commands and strike forces on the ground, the book reveals insider details such as how the use of drones and airstrikes—representing a significant change in American warfare—came about. Though primarily a memoir, the text straddles several genres, all of which keep Pittard and Bryant at the fore. They provide both a historical account of the fight and psychological insights into the mentalities of professional soldiers...

Pittard and Bryant take turns telling the story, but the narrative is cohesive and engaging, revealing stories that most of the general public will not know...

Hunting the Caliphate is a raw and honest account of how ISIS was beaten, told from the inside by those who brought the caliphate down.”
— Foreword Clarion Reviews