A Guide to the Formation of the Constitution (Paperback) 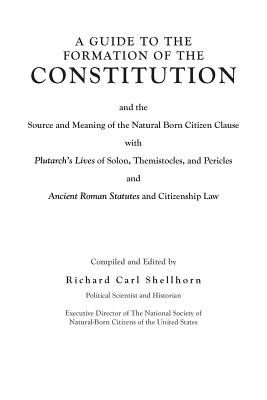 By Richard Carl Shellhorn
$22.95
Not currently in store. Available to ship from distributor's warehouse.

The Constitution is the Supreme Law of the United States. All elected officials, both at the National and State level, are required to swear an oath of allegiance to uphold and support our Constitution. All military personnel and many professions, including those who are trained in law, are required to swear loyalty to the Constitution by oath. But do those people actually know what the oath requires them to adhere to? Have they been properly educated on the formation of the Constitution by those Delegates sent by the States in May of 1787 to Philadelphia to write the Constitution? Unless the person has studied how the process transpired from introduction of principles to the finished Constitution, they have a poor understanding and are less knowledgeable than can be imagined. This book is not a rearrangement of the words that changes the meaning and intent of the speaker, but exactly the words spoken and written to give more emphasis to the intent. The Constitution can only be understood by the intent of the Deputies in 1787. Many deceitful men and women want the undereducated to believe that following the War for Independence from an unjust British government, that those Deputies would base our new Constitution on English Common Law. That notion is further from the truth than even they know and the cause of incorrect rulings in Federal courts. When you read this condensed-by-editing book of the Notes of James Madison, the edited version by Max Farrand; the edited pieces from Plutarch's Lives of Solon, Themistocles, and Pericles; and selected laws from Ancient Roman Statutes, you may better understand the educational background the Deputies were exposed to before the formation of our Constitution. Learn why and how the Constitution came together with the intent to provide a government where the people are to be represented at fixed ratio of one Representative per thirty thousand (30, 000) inhabitants.