Robbie's World: and His SPECTRUM of Adventures! Book 1 (Paperback) 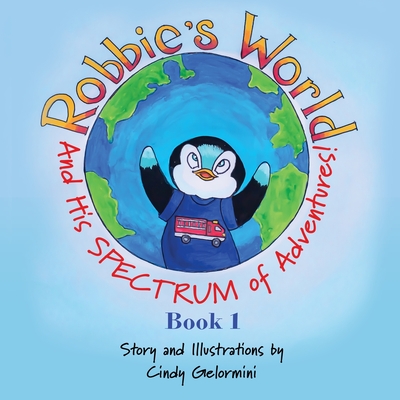 Meet Robbie the Penguin While Robbie is in pre-school his teacher notices that he doesn't talk, and he really likes to rock. After visiting the Doctor he is diagnosed with Autism and begins to attend a special school. Follow him on his adventures where he goes swimming, goes to a parade and the fireworks, eats ice cream, and runs away a lot As you're laughing you'll also be learning a lot about kids with Autism.

Cindy Gelormini is the Author and Illustrator of the "Robbie's World" trilogy and is Robbie's Mom. She works in the Interior Design field where she began as a decorative artist painting children's murals. She was also a singer songwriter and worship leader, so she wrote the books like rhyming lyrics. For four years she followed Robbie's life on YouTube on their video blog called "Robbie and Me: Autism Reality", which can still be viewed to this day. When Robbie went to heaven on November 7, 2017, penguins in the form of toys and paperweights began to show up in unlikely places. Weeks later when they cleaned out Robbie's room in his group home they found in his DVD player the last movie Robbie ever watched..."Happy Feet" about dancing penguins They realized they were getting messages from heaven. Cindy wanted to continue Robbie's story to help bring love, understanding and acceptance to the Autism Community, so she wrote Robbie's story as a children's book series telling stories from when he was a little boy. The idea of him being a penguin though, that was Robbie's idea.