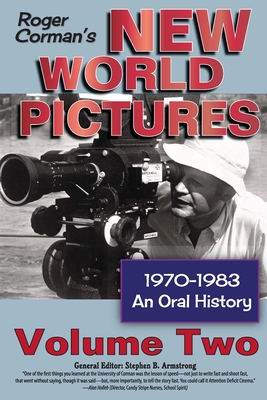 By Stephen B. Armstrong
$29.70
Not currently in store. Available to ship from distributor's warehouse.
(This book cannot be returned.)

In 1970, Roger Corman launched his film production-distribution company New World Pictures. Over the next thirteen years, he would supervise the creation and release of more than one-hundred films, including such low-budget classics as The Big Doll House (1971), Battle Beyond the Stars (1980) and Galaxy of Terror (1981). Shot through with entertaining anecdotes about the art--and the business--of making movies, Roger Corman's New World Pictures (1970-1983): An Oral History, Volume 2 features interviews with seventeen movie professionals who worked for Corman during this charismat- ic and wild time in Hollywood history, among them costume designer Jane Ruhm, story editor Frances Doel, editors Mark Helfrich and Kent Beyda and directors Steve Carver, Allan Arkush and Joe Dante.

"Although New World wasn't the only non-union outfit making low-budget exploitation pictures for the drive-in and grindhouse market, it was the premiere destination for every movie-mad kid who wanted to break into the Hollywood system. Roger Corman's track record in taking a chance on new talent was already legendary, and hopefuls from all over the country were attracted like moths to flame. In hindsight, New World's legacy has far outstripped that of competitors like Dimension and Crown International."-- Joe Dante (Director, Piranha, Gremlins, The 'burbs)

"We were all in our twenties and crazy for movies. It was the '70s, and we were devoted to New World Pictures and Roger Corman, the Medici of indie filmmakers. Roger was the Dean of the greatest movie grad school ever, and we were his eager and tireless students. From Fellini and Truffaut to piranhas and punks, it was 24/7 for five years, and then it was time to move on. Now's a good time to look back."
-Allan Arkush (Director, Rock 'N' Roll High School, Get Crazy, The Temptations)