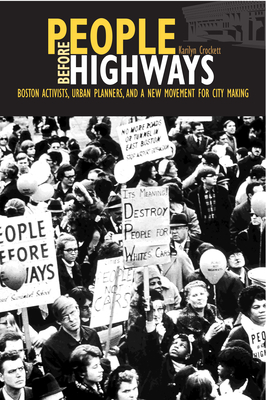 In 1948, inspired by changes to federal law, Massachusetts government officials started hatching a plan to build multiple highways circling and cutting through the heart of Boston, making steady progress through the 1950s. But when officials began to hold public hearings in 1960, as it became clear what this plan would entail--including a disproportionate impact on poor communities of color--the people pushed back. Activists, many with experience in the civil rights and antiwar protests, began to organize. Linking archival research, ethnographic fieldwork, and oral history, Karilyn Crockett in People before Highways offers ground-level analysis of the social, political, and environmental significance of a local anti-highway protest and its lasting national implications. The story of how an unlikely multiracial coalition of urban and suburban residents, planners, and activists emerged to stop an interstate highway is one full of suspenseful twists and surprises, including for the actors themselves. And yet, the victory and its aftermath are undeniable: federally funded mass transit expansion, a linear central city park, and a highway-less urban corridor that serves as a daily reminder of the power and efficacy of citizen-led city making.

Karilyn Crockett is an independent scholar and director of Economic Policy & Research for the City of Boston. She holds a PhD in American studies from Yale University.