Won't Lose This Dream: How an Upstart Urban University Rewrote the Rules of a Broken System (Hardcover) 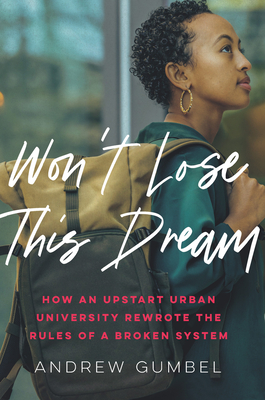 Georgia State . . . has been reimagined--amid a moral awakening and a raft of data-driven experimentation--as one of the South's more innovative engines of social mobility.
--The New York Times

Won't Lose This Dream is the inspiring story of a public university that has blazed an extraordinary trail for lower-income and first-generation students in downtown Atlanta, the birthplace of the civil rights movement.

Over the past decade Georgia State University has upended the conventional wisdom that large numbers of students are doomed to fail simply because of their economic background or the color of their skin. Instead, it has harnessed the power of big data to identify and remove the obstacles that previously stopped them from graduating and completely transformed their prospects. A student from a mediocre high school working two jobs to make ends meet is now no less likely to succeed than a child of wealth and privilege--an earth-shaking achievement that is reverberating across every college campus in the country.

With unique access to the key players and drawing on his skills as an investigative reporter, Andrew Gumbel delivers a thrilling, blow-by-blow account of a long battle to determine whether universities exist for their students or vice versa. The story is told through the visionary leaders who overcame fierce resistance to tear up the rules of their own institution and through the many remarkable students whose resilience and determination, often against daunting odds, inspired the work at every stage. Their success shows how the promise of social advancement through talent and hard work, the essence of the American dream, can be rekindled even in an age of deep inequalities and divisive politics.

Andrew Gumbel is a British-born journalist, based in Los Angeles, who has won awards for his work as an investigative reporter, a political columnist, and a feature writer. He is a regular contributor to The Guardian and the author of Down for the Count and the co-editor (with David W. Orr, William S. Becker, and Bakari Kitwana) of Democracy Unchained (both from The New Press). He is also the author of Oklahoma City: What the Investigation Missed, and Why It Still Matters.