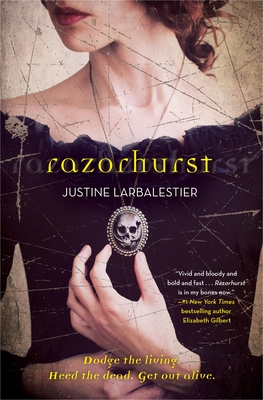 By Justine Larbalestier
$10.99
Available to Ship from Distributor's Warehouse

"Vivid and bloody and bold and fast—I feel like Razorhurst is in my bones now."
—#1 New York Times bestselling author Elizabeth Gilbert

The notoriously bloody history of a mob-run Sydney, Australia neighborhood is fertile ground for this historical thriller with a paranormal twist: two girls' ability to see the many ghosts haunting Razorhurst.

Sydney’s deadly Razorhurst neighborhood, 1932. Gloriana Nelson and Mr. Davidson, two ruthless mob bosses, have reached a fragile peace—one maintained by “razor men.” Kelpie, orphaned and homeless, is blessed (and cursed) with the ability to see Razorhurst’s many ghosts. They tell secrets that the living can’t know about the cracks already forming in the mobs’ truce.

Kelpie meets Dymphna Campbell, Gloriana’s prize moll, over the body of the latest of Dymphna’s beaus to meet an untimely end—a string that’s earned her the nickname the “Angel of Death.” Dymphna can see ghosts, too, and she knows that Gloriana’s hold is crumbling one henchman at a time. As loyalties shift and betrayal threatens the two girls at every turn, Dymphna is determined to rise to the top with Kelpie at her side.

Justine Larbalestier is the Australian-American author of many novels, including Liar, which received four starred reviews, and My Sister Rosa. Justine lives in Sydney, Australia, and New York City, though not at the same time. You can find her on Twitter @JustineLavaworm andher website, justinelarbalestier.com.

"Larbalestier weaves the history of Surry Hills into a story that is full of violence, sex, crime, corruption, nobility, love and lust, bringing a lost place to life even as she grabs us by the lapels and drags us through a fantastic supernatural caper story . . . This one takes [Larbalestier's] storytelling to a whole new level."
—Cory Doctorow for BoingBoing.com

"Razorhurst is both fast-paced thriller and noir but with a paranormal twist . . . Larbalestier’s most compelling character isn’t a person or even a ghost but rather a place."
—Boston Herald

"Razorhurst by Justine Larbalestier takes readers down a dark and dangerous story of mobs and those that desire power."
—Fresh Fiction

"[Razhorhurst] is a grisly, teasing, frightening, beautiful book . . . The chase-and-caper plot comes in fast, staccato bursts . . . Still, unexpected kindness wells up through the cracks in story and style, showing how varied lives on the edge of desperation can find some kind of compromise that allows for hope."
—Rain Taxi Review of Books

"The novel is edgy and bloody, and readers of gangster stories will love the dangerous situations that the characters experience. The added level of the supernatural gives this story another dimension, literally."
—The Historical Novel Society

"Larbalestier packs plenty of danger into the single day this novel covers, but frequent interludes of backstory keep things from feeling rushed. The narrative also benefits from a colorful, well-rendered cast, human and ghost alike. While the writing style calls to mind fiction of an earlier era, this story’s interwoven intrigue and empathy make it feel timeless."
—Publishers Weekly, STARRED Review

"Characters both living and dead reveal crucial pieces of the plot slowly over the course of one harrowing day. Larbalestier pulls no punches with the gruesome, gory details about the violence of poverty, and the result is a dark, unforgettable and blood-soaked tale of outlaws and masterminds."
—Kirkus Reviews, STARRED Review

"Reading like a detailed painting in novel form, this haunting, gorgeously rendered supernatural/historical novel captures the rough and tumble world of gangsters and molls in all its bloody, vicious glory... The novel is as much about the place and time as it is about the young women, and readers interested in immersing themselves completely in an unforgettable setting will revel in this well-researched, true-to-life adventure."
—Bulletin of The Center for Children's Books, STARRED Review

"The sheer unusualness of the narrative’s makeup and blend of genres render it interesting. Readers fascinated by the gritty world of organized crime will find much to like here."
—Booklist

"Vivid and bloody and bold and fast—I feel like Razorhurst is in my bones now."
—#1 New York Times bestselling author Elizabeth Gilbert

"Sure, it is shiny and chilly and bloody and sharp, like the razor of the title, but Larbalestier's book is also magical and glamorous. Everything comes together in a surprising, gory, inevitable ending from one of the smartest writers in YA fiction."
—E. Lockhart, author of We Were Liars

“Razorhurst by Justine Larbalestier is a bloody masterpiece (pun intended)—the kind of book that feels classic and timeless and sharp with characters that live and breathe off the page. In short: wow.”
—Courtney Summers, author of This Is Not a Test and All the Rage

"Razorhurst is magnificent—beautiful prose and good storytelling."
—Amber Benson, author of The Witches Of Echo Park and star of Buffy the Vampire Slayer

"A timeless tale of love and violence in long lost Razorhurst with characters I truly cared about."
—Melina Marchetta, author of Jellicoe Road

"A bloody and evocative novel, written in clean and lively prose."
—The Sydney Morning Herald

“Has everything it takes to be an instant classic.”
—Cory Doctorow

“Loaded with brilliant, witty characters and stacks of invented slang, this is a fun, fresh read as well as a satrical study of society.”
—Sun Herald

“A well-paced novel with a masterfully constructed unreliable narrator . . . Readers will be guessing and theorizing long after they've finished this gripping story.”
—Publishers Weekly, Starred Review