Strangers in Budapest: A Novel (Hardcover) 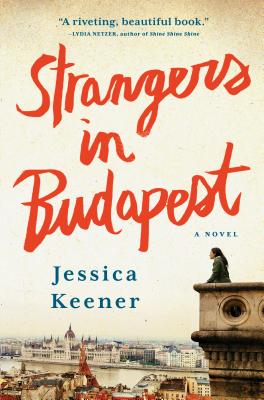 By Jessica Keener
Email orders@tridentbookscafe.com or call for price
Out of Print

“With the fall of the communist regime, Budapest let in the light of new ideas and new people. Into this world of new opportunity move Americans Annie and Will. They are excited to create a new life together when then they meet mysterious, dangerous Edward. Will's instincts warn him to stay away from this new acquaintance, but Annie is compelled to help him. As she and Will go deeper into the darkness of this stranger's plan for revenge against his daughter's supposed murderer, the tension becomes almost unbearable. Make no mistake - Strangers in Budapest is a tight, well-written thrill of a story you will not forget.”
— Linda Bond, Auntie's Bookstore, Spokane, WA

“Jessica Keener has written a gorgeous, lyrical, and sweeping novel about the tangled web of past and present. Suspenseful, perceptive, fast-paced, and ultimately restorative.” —Susan Henderson, author of Up from the Blue

Budapest: gorgeous city of secrets, with ties to a shadowy, bloody past.  It is to this enigmatic European capital that a young American couple, Annie and Will, move from Boston with their infant son shortly after the fall of the Communist regime. For Annie, it is an effort to escape the ghosts that haunt her past, and Will wants simply to seize the chance to build a new future for his family.

Eight months after their move, their efforts to assimilate are thrown into turmoil when they receive a message from friends in the US asking that they check up on an elderly man, a fiercely independent Jewish American WWII veteran who helped free Hungarian Jews from a Nazi prison camp. They soon learn that the man, Edward Weiss, has come to Hungary to exact revenge on someone he is convinced seduced, married, and then murdered his daughter.

Annie, unable to resist anyone’s call for help, recklessly joins in the old man’s plan to track down his former son-in-law and confront him, while Will, pragmatic and cautious by nature, insists they have nothing to do with Weiss and his vendetta. What Annie does not anticipate is that in helping Edward she will become enmeshed in a dark and deadly conflict that will end in tragedy and a stunning loss of innocence.

Atmospheric and surprising, Strangers in Budapest is, as bestselling novelist Caroline Leavitt says, a “dazzlingly original tale about home, loss, and the persistence of love.”

Jessica Keener is the author of the national bestselling novel Night Swim and a collection of award-winning short stories, Women in Bed. Her work has appeared in O, The Oprah Magazine, Redbook, the Boston Globe, Agni, and other publications, and she has taught English literature and writing at Brown University, Boston University, the University of Miami, and GrubStreet. She lives in the Boston area. Learn more at www.jessicakeener.com.

A December 2017 Indie Next Pick

“Jessica Keener writes about post-communist Hungary with the heart and specificity of someone who’s lived it . . . her writing sparkles . . . Strangers in Budapest doesn’t exoticize or patronize its location; rather, in a rare achievement for an American novel of this international emphasis, it revels in the complexity of its appeal.”
—Entertainment Weekly

“Full of seduction and intrigue, this thrilling novel is a perfect homage to a city in transition.”
—Real Simple

“In her tense and atmospheric thriller . . . Keener establishes a definitive sense of time and place, makes a sensitive portrait of expat life, and examines ideas of what we lose, where we find home, and how love can and cannot survive.”
—The Boston Globe

“This haunting, beautifully written story emerges from the shadows and narrow streets of Budapest and its historic mysteries to raise intriguing questions about the power of the past, grief, guilt, the endurance of pain and whether redemption is a worthy goal.”
—Hadassah Magazine

“With chills lurking around each corner, this second novel by author Jessica Keener is the perfect page-turner for late autumn.”
—Boston Magazine

“Full of suspense . . . Keener depicts Budapest as its own character, with beauty, suffering and colorful revolutionary attitudes.”
—Improper Bostonian

“A slow burn of an international psychological thriller. Recommended for fans of Chris Pavone.”
—Library Journal

“Keener immerses the reader in Budapest’s post-communist period in all its tumultuous glory . . . the author combines strong characters and a riveting plot to craft a memorable novel.”
—Publishers Weekly

“Keener’s second psychological novel, set in modern Hungary, dramatizes both national and personal outcomes of harrowing past events. Budapest becomes a powerful symbol of past horrors, lush culture, and an uncertain future. Reminiscent of Hilary Mantel’s Eight Months on Ghazzah Street . . . and similar in tone and theme to Kim Brooks’ historical novel, The Houseguest.”
—Booklist

“In Keener’s Strangers in Budapest, the city is as much a character as any, and as Annie and others begin to cave under its crumbling weight, what’s revealed where East meets West is a story about the implacability of the past—present, progress, and denials notwithstanding.”
—Foreword Reviews

“A genuine love letter to a little-understood city, where even outsiders with the best intentions will always remain strangers.”
—Manhattan Book Review

“Keener expertly weaves together a story that not only showcases an expat life, but also shares the tragedies, memories and grudges of strangers in a beautiful city who are more connected than they have come to believe.”
—BookPage

“Keener’s writing is unquestionably skillful. Her ability to render multidimensional characters through sophisticated description and dialogue is excellent.”
—Chicago Review of Books

“Most impressive . . . is Keener’s Budapest, a rough-edged, darkly beautiful city rushing into the future. It makes for an ideal place in which to explore themes of loss, love, and the courage required to come to terms with the past.”
—Jewish Book Council

“Annie and Will, a young American couple with a new child, repair to Budapest to forge their future and escape their past. What they find is a city smothered by heat and tangled in history. When their paths cross with a mysterious elderly man named Edward Weiss, Annie discovers that she’s caught up in a life of tragedy that forces her to confront the losses in her own past. Strangers in Budapest is a beautifully written mystery propelled by well-crafted and fully imagined characters. Atmospheric and ominous, this novel asks us what we’re willing to do to start over in a new world when the old world won’t let us go.”
—Wiley Cash, bestselling author of The Last Ballad

“From the first pages of Strangers in Budapest, the words 'You must not tell anyone' made me feel as if a hand had reached out from the shadows to pull me under, and I was swept away inexorably by this hypnotic plot, these dark scenes, and the relentless tension. Budapest is a riveting, beautiful book that throbs with plot and sparkles with excellent prose.”
—Lydia Netzer, author of Shine Shine Shine

“A provocative novel about the power of the past--and our interpretations and misinterpretations of it--to haunt the present. An unlikely alliance between an elderly man and a young mother, both American ex-pats living in Budapest in the 1990s, brings this dilemma to life as the two struggle with their demons in a city unable to shake its own. A wonderful book.”
—B. A. Shapiro, author of The Muralist

“Jessica Keener has written a gorgeous, lyrical and sweeping novel about the tangled web of past and present. Set in a richly detailed Budapest, an American couple and their newly adopted son, there for the promise of building a business, become entangled with an irritable WWII vet hoping to settle a score. A story of confronting truths, acknowledging old wounds, and stepping into the present. Suspenseful, perceptive, fast-paced, and ultimately restorative.”
—Susan Henderson, author of Up from the Blue

“What do we run away from? And what do we run toward? Two American expatriates in Budapest, a lonely young mother with a devastating secret, and an old man desperate to discover the truth about his daughter’s death, forge a shattering connection. Gorgeously told and deeply moving, Keener’s brilliant new novel is a bold, brave and dazzlingly original tale about home, loss and the persistence of love.”
—Caroline Leavitt, author of Cruel Beautiful World

“In the Budapest of Jessica Keener’s gripping new novel, menace lurks down every street and infuses every interaction, until the city itself becomes a brooding, sinister presence. With lyrical prose, Keener examines grief and guilt, deception and hatred, and the search for an elusive redemption. Strangers in Budapest is a remarkable novel that continues to haunt me, weeks after I reached its powerful, unexpected conclusion.”
—Lauren Belfer, New York Times bestselling author of City of Light, A Fierce Radiance, and And After the Fire

“A mesmerizing story of love and loss. Keener probes the depths to which grief and disappointment can drive a person away from those who only wish to love them.”
—Karen Dionne, author of The Marsh King’s Daughter

“A taut, elegantly written, magnificent novel. I can touch, taste, smell, hear Budapest. Even the car alarms are rendered with beauty and precision. Jessica Keener turns pain and redemption into a masterful work of art.”
—Risa Miller, author of Welcome to Heavenly Heights

“In Strangers in Budapest, Jessica Keener’s riveting novel of conscience and suspense, multiple strands of fate and guilt, cultural memory and private trauma overlap and tighten into an ethical knot of compelling, hypnotic design. An enthralling read!”
—Melissa Pritchard, award-winning author of Palermo

“This exquisite novel draws the reader in from the very first pages and refuses to let go. Not only did I feel like I was in the exotic, beautiful city of Budapest, but every emotion felt by the young mother at the center of this ominous tale became my own. In Strangers in Budapest, Jessica Keener proves once again that she is a brilliant, lyrical writer with a true understanding of the human heart.”
—Ellen Marie Wiseman, internationally bestselling author of The Plum Tree, What She Left Behind, Coal River and The Life She Was Given

“Strangers in Budapest is both lyrical and propulsive, capacious and rich in detail. The characters will stay with you forever. A courageous, compassionate and deeply wise novel.”
—Patry Francis, author of The Orphans of Race Point