Negroes and the Gun: The Black Tradition of Arms (Paperback) 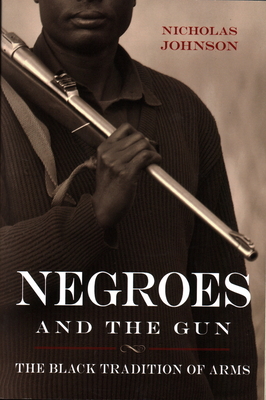 By Nicholas Johnson
$19.95
Not currently in store. Available to ship from distributor's warehouse.

Chronicling the underappreciated black tradition of bearing arms for self-defense, this book presents an array of examples reaching back to the pre—Civil War era that demonstrate a willingness of African American men and women to use firearms when necessary to defend their families and communities. From Frederick Douglass’s advice to keep “a good revolver” handy as defense against slave catchers to the armed self-protection of Monroe, North Carolina, blacks against the KKK chronicled in Robert Williams’s Negroes with Guns, it is clear that owning firearms was commonplace in the black community.

Nicholas Johnson points out that this story has been submerged because it is hard to reconcile with the dominant narrative of nonviolence during the civil rights era. His book, however, resolves that tension by showing how the black tradition of arms maintained and demanded a critical distinction between private self-defense and political violence.

Johnson also addresses the unavoidable issue of young black men with guns and the toll that gun violence takes on many in the inner city. He shows how complicated this issue is by highlighting the surprising diversity of views on gun ownership in the black community. In fact, recent Supreme Court affirmations of the right to bear arms resulted from cases led by black plaintiffs.

Surprising and informative, this well-researched book strips away many stock assumptions of conventional wisdom on the issue of guns and the black freedom struggle.

Nicholas Johnson (New York, NY) is professor of Law at Fordham Law School, where he has taught since 1993. A graduate of Harvard Law School, he is the lead author of Firearms Law and the Second Amendment: Regulation, Rights, and Policy (Aspen 2012).

“America’s gun culture is often thought to be lily white. In this groundbreaking book, Nicholas Johnson shows how African Americans, from the abolitionists to the Deacons for Defense and Justice, have taken up arms time and again to fight for their rights and their lives. You’ll never look at guns and the Second Amendment in the same way again.”

—Adam Winkler, professor of law, UCLA School of Law, author of Gunfight: The Battle over the Right to Bear Arms in America

“With Negroes and the Gun, Nicholas Johnson has provided a definitive and compelling history of the importance of arms for a people who have not been able to rely on the state for protection. This is must-reading for those who are interested in the history of race in America and in the enduring controversy over the right to bear arms.”

—Robert J. Cottrol, Harold Paul Green Research Professor of Law and professor of history and sociology, the George Washington University, and author of The Long, Lingering Shadow: Slavery, Race, and Law in the American Hemisphere

“Race has always been part of the unspoken motive for gun control in the United States. Johnson provides the best, most thorough history of the topic, telling the story mainly from the perspective and voices of blacks themselves. Shattering the myth of black passivity in the face of violent racism, the book is full of inspiring stories of genuine American heroes—some of them famous and many who were not—who used their Second Amendment rights to defend the civil rights of their people. Never shying away from the hardest questions, Johnson addresses the moral and practical complexities of armed self-defense, past and present. A major contribution to cultural studies and to the history of race in America.”

“Johnson opens a window on the increasingly airless and ever more heated dispute over the Second Amendment by examining blacks’ ambiguous relationship with guns over the centuries. He demonstrates that the right to armed self-defense was critical to saving black lives and livelihoods when confronted by violent hostility. This remarkable book remembers for us a long-forgotten, or possibly selectively forgotten, black tradition of arms—one too often overlooked in current debates over civil rights and gun legislation.”

“A fascinating and subtle history of the black tradition of armed self-defense. Carefully weaving social with political history from slave times to the present, Johnson explores the complex relation between this legitimate tradition and the occasional fruitless temptation of armed political resistance to oppression. He concludes with a strong argument for restoring the legitimate tradition even in the face of its rejection by the black political establishment and the inescapable reality that blacks are very disproportionately found among the perpetrators and victims of gun violence today. Provocative and illuminating.”