Tara Duncan and the Spellbinders (Hardcover) 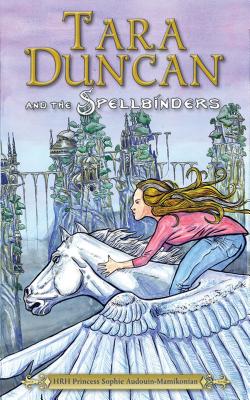 By HRH Princess Sophie Audouin-Mamikonian, William Rodarmor (Translated by)
Email orders@tridentbookscafe.com or call for price
Out of Print

Though only twelve years old, orphaned Tara has developed strange telekinetic powers that allow her to bend space and levitate others high above the ground, as if they are lighter than air. Her two best friends, Betty and Fabrice—often the victims of Tara’s uncontrollable abilities—are the only ones who know about Tara’s secret. Even her grandmother and caretaker, Isabella, doesn’t have a clue. That is until Tara learns that she is a spellweaver, descended from a long line of powerful magic-wielders born on the planet OtherWorld. Forced to flee her Earth home when Magister, the Master of the Bloodgraves, attacks, Tara escapes to planet Other- World, where she finds loyal friends and learns about her mysterious powers. But when Tara discovers that her mother is alive and being held captive by Magister, will she be able to save her?
Tara Duncan is an inspiring heroine, whose adventures and personal struggles will captivate readers already hooked by fantasy adventures and characters like Harry Potter. This is the first installment of the Tara Duncan series—an epic adventure full of magic and bravery that is sure to cast a spell on young readers!