Reading the Buddha's Discourses in Pali: A Practical Guide to the Language of the Ancient Buddhist Canon (Hardcover) 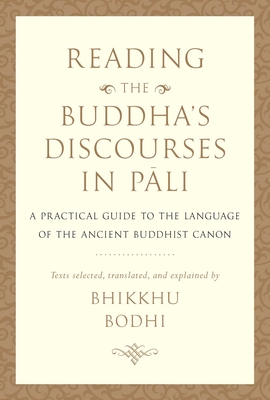 Bhikkhu Bodhi’s sophisticated and practical instructions on how to read the Pali of the Buddha’s discourses will acquaint students of Early Buddhism with the language and idiom of these sacred texts. Here the renowned English translator of the Pali Canon opens a window into key suttas from the Samyutta Nikaya, giving a literal translation of each sentence followed by a more natural English rendering, then explaining the grammatical forms involved. In this way, students can determine the meaning of each word and phrase and gain an intimate familiarity with the distinctive style of the Pali suttas—with the words, and world, of the earliest Buddhist texts.

Ven. Bodhi’s meticulously selected anthology of suttas provides a systematic overview of the Buddha’s teachings, mirroring the four noble truths, the most concise formulation of the Buddha’s guide to liberation. Reading the Buddha’s Discourses in Pali shares with readers not only exceptional language instruction but also a nuanced study of the substance, style, and method of the early Buddhist discourses.

Ven. Bhikkhu Bodhi is an American Buddhist monk from New York City, born in 1944. He obtained a BA in philosophy from Brooklyn College and a PhD in philosophy from Claremont Graduate School. After completing his university studies he traveled to Sri Lanka, where he received novice ordination in 1972 and full ordination in 1973, both under the leading Sri Lankan scholar-monk Ven. Balangoda Ananda Maitreya (1896–1998). From 1984 to 2002 he was the editor for the Buddhist Publication Society in Kandy, where he lived for ten years with the senior German monk Ven. Nyanaponika Thera (1901–1994) at the Forest Hermitage. He returned to the United States in 2002. He currently lives and teaches at Chuang Yen Monastery in Carmel, New York. Ven. Bodhi has many important publications to his credit, either as author, translator, or editor. These include The Middle Length Discourses of the Buddha (Majjhima Nikaya, 1995), The Connected Discourses of the Buddha (Samyutta Nikaya, 2000), and The Numerical Discourses of the Buddha (Anguttara Nikaya, 2012). In 2008, together with several of his students, Ven. Bodhi founded Buddhist Global Relief, a nonprofit supporting hunger relief, sustainable agriculture, and education in countries suffering from chronic poverty and malnutrition.

"Written with characteristic warmth by Bhikkhu Bodhi, one of the foremost translators of Pali literature, Reading the Buddha’s Discourses in Pali serves as a wonderfully accessible and much-needed resource both for students of Pali and those who want to deepen their understanding of early Buddhist literature. This generous book offers anyone and everyone the opportunity to come and see for themselves the beautiful world of Pali texts."
— Alastair Gornall

"Every student of Pali will welcome Bhikkhu Bodhi's Reading the Buddha's Discourses in Pali.  As an aid for learning how to read Buddhist texts in Pali and as a resource for learning from what one reads in Pali, there is nothing else like it."
— Charles Hallisey

"Bhikkhu Bodhi’s overview of Pali grammar, his judicious selection of passages, his literal translations to accompany the final translations, and his clear word by word grammatical analysis all add up to a wonderful aid for all who wish to deepen their understanding of the discourses of the Pali canon by reading them directly in Pali."
— Rupert Gethin

"This is an excellent introduction to the Buddha’s teachings and the linguistic medium that the Buddha used to express the timeless truths of the Buddhadhamma. Pali is the closest witness we have to the language the Buddha spoke—it preserves the oral, vernacular character and the natural idioms and sonic immediacy of the Teacher’s dialogues with his contemporaries and teachings to his disciples. Reading the Buddha’s Discourses in Pali allows the reader to enter into the “thought world” of the Buddha, the special linguistic realm that, in its conciseness, immediacy, fluidity, and inner harmony, captures and complements the brilliance of his teachings.

After a near lifetime of Pali-English translation work, Ven. Bodhi has perfected the art. His renderings are always reliable and doctrinally accurate, honoring what the Buddha said and the sincerity, directness, and compassion with which he spoke. Bhikkhu Bodhi does an excellent job in bringing the reader back to the Buddha’s time (late fifth to early fourth century BCE) and reanimating his words for a modern reader."
— Bryan Levman