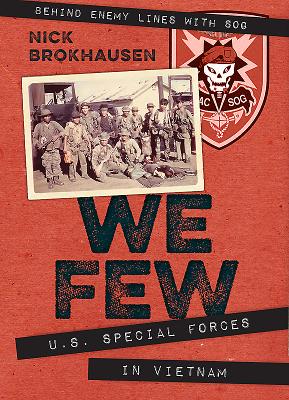 By Nick Brokhausen
$32.95
Not currently in store. Available to ship from distributor's warehouse.

Brokhausen mixes irreverence, perversity, and sarcasm with touches of gonzo journalism to recreate his 1970 tour with the Military Assistance Command Vietnam Studies and Observations Group... -- Vietnam Veterans of America

This riveting memoir details the actions and experiences of a small group of Americans and their allies who were the backbone of ground reconnaissance in the Republic of Vietnam during the Vietnam War. On his second tour to Vietnam, Nick Brokhausen served in Recon Team Habu, CCN. This unit was part of MACV-SOG (Military Assistance Command Vietnam Studies and Observations Group), or Studies and Observations Group as it was innocuously called. The small recon companies that were the center of its activities conducted some of the most dangerous missions of the war, infiltrating areas controlled by the North Vietnamese in Laos, Vietnam, and Cambodia. The companies never exceeded more than 30 Americans, yet they were the best source for the enemy's disposition and were key to the US military being able to take the war to the enemy, by utilizing new and innovative technology and tactics dating back to the French and Indian Wars. Brokhausen's group racked up one of the most impressive records of awards for valor of any unit in the history of the United States Army. It came at a terrible price, however; the number of wounded and killed in action was incredibly high. Those missions today seem suicidal. In 1970 equally so, yet these men went out day after day with their indigenous allies - Montagnard tribesmen, Vietnamese, and Chinese Nungs - and faced the challenges with courage and resolve.