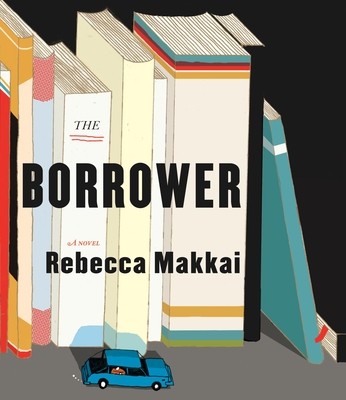 “A 26-year-old children's librarian, Lucy Hull, allows herself to be 'kidnapped' by one of her precocious 10-year-old patrons, a boy intent on running away from home. The pair end up on a hilarious road trip that ping-pongs them across the Midwest and out to the East Coast. Makkai's writing is sharp and funny, and book lovers will enjoy the many references to well-known titles, from echoes of the road trip in Lolita to a chapter that is structured like a Choose Your Own Adventure story. What a wonderful, assured, and original debut!”
— Shuchi Saraswat, Titcomb's Bookshop, East Sandwich, MA

Lucy Hull, a young children’s librarian in Hannibal, Missouri, is unsure where her life is headed. That becomes more than a figure of speech when her favorite patron, ten-year-old Ian Drake, runs away from home and Lucy finds herself in the surprise role of chauffeur.

The precocious Ian is addicted to reading, but needs Lucy’s help to smuggle books past his overbearing mother, who has enrolled Ian in weekly antigay classes with celebrity Pastor Bob. Lucy stumbles into a moral dilemma when she finds Ian camped out in the library after hours with a knapsack of provisions and an escape plan.

The odd pair embarks on a crazy road trip from Missouri to Vermont, with ferrets, an inconvenient boyfriend, and dubious family history thrown in their path. But who is actually running away? And from what?

EMILY BAUER is an award winning voiceover artist who has narrated countless audiobooks for both children and adults. She has also voiced cartoons, talking toys, and scores of radio and TV commercials. Her credits also include the film Mona Lisa Smile and the 35th anniversary production of Hair. Her website is www.EmilyBauer.com.

REBECCA MAKKAI’s stories have been anthologized in The Best American Short Stories 2008, 2009, and 2010, and have appeared in Tin House, Ploughshares, The Threepenny Review, and on NPR’s Selected Shorts. Makkai teaches elementary school and lives north of Chicago with her husband and two daughters.

“A splendid first novel that cleverly weaves telling references to children’s books into her whimsically patchwork plot. Larger-than-life characters and an element of the picaresque add to the delights.”
—Booklist [starred review]

“How could any [one] of any age resist Rebecca Makkai’s charming The Borrower?”
—O, the Oprah Magazine

“Makkai is clearly a lover of the public book-lending institution. Her careful, attentive approach seamlessly weaves literary lore into her unusual and touching story of a librarian fighting for social liberty and freedom of expression.”
—The Washington Post