A Place at the Table: The Crisis of 49 Million Hungry Americans and How to Solve It (Paperback) 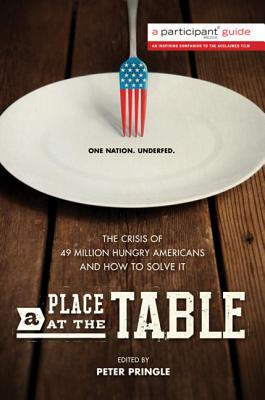 Forty-nine million people -- including one in four children -- go hungry in the U.S. every day, despite our having the means to provide nutritious, affordable food for all. Inspired by the acclaimed documentary A Place at the Table, this companion book offers powerful insights from those at the front lines of solving hunger in America, including:

Jeff Bridges, Academy Award-winning actor, cofounder of the End Hunger Network, and spokesperson for the No Kid Hungry Campaign, on raising awareness about hunger
Ken Cook, president of Environmental Working Group, unravels the inequities in the Farm Bill and shows how they affect America's hunger crisis
Marion Nestle, nutritionist and acclaimed critic of the food industry, whose latest work tracks the explosion of calories in today's "Eat More" environment
Bill Shore, Joel Berg, and Robert Egger, widely-published anti-hunger activists, suggest bold and diverse strategies for solving the crisis
Janet Poppendieck, sociologist, bestselling author, and well-known historian of poverty and hunger in America, argues the case for school lunch reform
Jennifer Harris, of Yale University's Rudd Center for Food Policy and Obesity, uncovers the new hidden persuaders of web food advertisers
David Beckmann, head of Bread for the World, and Sarah Newman, researcher on A Place at the Table, explore the intersection of faith and feeding the hungry
Mariana Chilton, director of Drexel University's Center for Hunger-Free Communities, discusses the health impacts of hunger and the groundbreaking Witnesses to Hunger project
Tom Colicchio, chef and executive producer of television's Top Chef, presents his down-to-earth case to Washington for increases in child nutrition programs
Andy Fisher, veteran activist in community food projects, argues persuasively why we have to move beyond the charity-based emergency feeding program
Kelly Meyer, cofounder of Teaching Gardens, illuminates the path to educating, and providing healthy food for, all children
Kristi Jacobson and Lori Silverbush, the film's directors/producers, tell their personal stories of how and why they came to make the documentary

Hunger and food insecurity pose a deep threat to our nation. A Place at the Table shows they can be solved once and for all, if the American public decides -- as they have in the past -- that making healthy food available, and affordable, is in the best interest of us all.

Peter Pringle is the author and coauthor of ten books on science and politics, including the New York Times Notable Book, Food Inc., the bestselling Those Are Real Bullets: Bloody Sunday, Derry, 1972, and a mystery-thriller about food and patents, Day of the Dandelion. For thirty years, he was a foreign correspondent for British newspapers, including the Sunday Times, the Observer, and the Independent. He lives in New York City.

Huntington News
“From Participant Media, the people who  brought you "Food, Inc” and Waiting for "Superman" the documentary, scheduled for March 1 release and the companion Participant Guide offer  an eye-opening exploration of how we can end hunger in America, maybe even before the 2015 date set by President Barack Obama. The book is based on the documentary but it can be read as a stand-alone look at the hunger problem.”