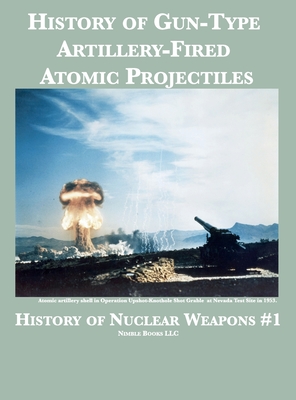 The marketplace for books about military history is crowded with an abundance of titles about every weapon system ever built, from trireme to Tiger tank, but, ironically, is almost deserted when it comes to the most fearsome weapons of all: the never-used nuclear weapons of the Cold War. That gap is partly filled by this never previously published series of declassified official histories written by Sandia National Laboratories in the late 1960s.

This volume is a history of the gun-type artillery-fired atomic projectiles that entered service beginning in 1952 with the Mk 9 and followed by Mks 19, 23, 32, and 33. The work contains a timeline; a narrative history; a glossary of terms; and 58 footnotes.

Development began in late 1949 (shortly after the first Soviet detonation of an atomic weapon) at the request of the Army. Sandia defines the weapon's mission as "a defensive or offensive weapon against infantry masses concentrated in front of the sector through which a breakthrough was planned. It was hoped that a nuclear artillery shell, fuzed for air burst, could destroy the ability of these troops to stage an attack, or defend the sector." It's noteworthy that the weapon was not expected to be used against the Soviet Union's primary land striking force, its tens of thousands of tanks in armored formations.

The initial design was for a 890-lb shell that could be fired from a 280-mm gun at muzzle velocity of 1700 feet per second. This was heavier and slower than a conventional shell and meant that special propellant charges, firing tables, and spotting shells were required in operation. Prototype shells were being fired by mid-1951, and the the Mk 9 Mod 0-ZZ Shell was successfully tested in Operation Upshot-Knothole at the Nevada Test Site in Shot Grable on May 23, 1953. Yield was the expected 15 kilotons.

The Mk 9 was replaced by the Mk 19, which was the same weight as a conventional shell and thus could be operated under normal firing procedures.

The Mk 23 shell was developed to be fired from the 16-inch (405-mm) rifles on board US Navy battleships with an amphibious warfare rather than antiship mission in mind. Initial deliveries were made to the Fleet in the same period as the Navy retired the last 16-inch rifle from active use.

The TX-32 shell was intended for use in the 240-mm howitzer, but was cancelled in favor of an 8-inch (203-mm) implosion design proposed by the University of California Radiation Laboratory. The Mk 33 shell was available by July 1955 for the 8-inch M-2 howitzer.

Fortunate indeed that the history of these particular weapons is not written in fire on the pages of history. In another world, this might be the story of the Mk 9 that was fired from "Atomic Annie" against the 5th Guards Banner Army at the Rhine, or the Katie that was fired from the battleship New Jersey to support the amphibious assault on Shanghai.