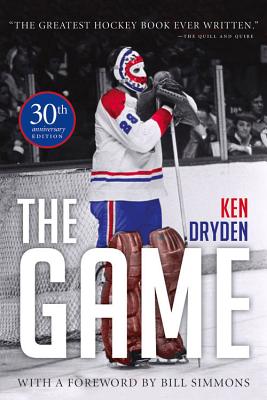 Widely acknowledged as the best hockey book ever written and lauded by Sports Illustrated as one of the Top 10 Sports Books of All Time, The Game is a reflective and thought-provoking look at a life in hockey. Ken Dryden, the former Montreal Canadiens goalie and former president of the Toronto Maple Leafs, captures the essence of the sport and what it means to all hockey fans. He gives vivid and affectionate portraits of the characters—Guy Lafleur, Larry Robinson, Guy Lapointe, Serge Savard, and coach Scotty Bowman among them—who made the Canadiens of the 1970s one of the greatest hockey teams in history. But beyond that, Dryden reflects on life on the road, in the spotlight, and on the ice, offering a rare inside look at the game of hockey and an incredible personal memoir. This commemorative edition marks the 30th anniversary of the book’s original publication, and it includes a new foreword by Bill Simmons, new photography, and a new chapter, “The Game Goes On.” Take a journey to the heart and soul of the game with this timeless hockey classic.

Ken Dryden is a member of the Hockey Hall of Fame and the Canadian Sports Hall of Fame and is widely recognized as one of the greatest goaltenders of all time. The Montreal Canadiens won the Stanley Cup six times during his eight seasons in goal with the team, and he won the Vezina trophy six times. He is the author of the books Home Game, In School, and The Moved and the Shaken. Ken served as a member of parliament, including as a cabinet minister, and was recently inducted into the Order of Canada. He lives in Toronto. Bill Simmons is the bestselling author of The Book of Basketball and Now I Can Die in Peace. He is the editor in chief of Grantland.com and a former writer for Jimmy Kimmel Live! He lives in Los Angeles.