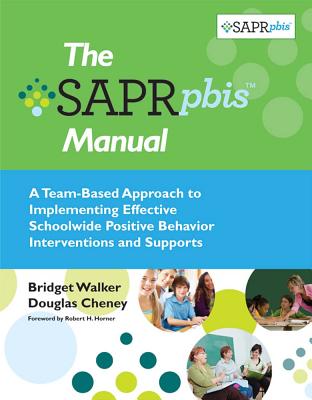 For all K-12 students and staff to benefit from positive behavior interventions and supports (PBIS), effective, evidence-based practices need to be in place schoolwide. Now there's a valid and reliable tool that checks the effectiveness of your whole school's PBIS efforts--without any need for an outside evaluator. SAPR(TM)-PBIS is the most efficient, comprehensive way to compare your current PBIS efforts with evidence-based practices and benchmarks. Six to ten team members from your school fill out individual self-assessments, rating themselves on key building blocks of successful PBIS. Then your whole team comes together to discuss results, set clear goals for improvement, and assess progress.

Proven in pilot studies to improve students' social outcomes and staff satisfaction, SAPR(TM)-PBIS gives your team the critical information you need to

With this highly reliable, easy-to-use tool, you can be confident that your school is implementing evidence-based PBIS practices that help improve all students' social and academic outcomes. SAPR(TM)-PBIS At A Glance What it does: , Helps your team evaluate the effectiveness of schoolwide PBIS efforts,
Grade range: , K-12,
When it's conducted: , Twice a year (fall and spring),
Areas screened: , 10 building blocks of PBIS, from functional behavior assessments to partnerships with families,
Who completes and scores it: , 6-10 team members from your school (administrator, school psychologist, counselor, special and general education teachers, and paraprofessionals),
Time to complete: , 30 minutes for individual self-assessment forms; 60-90 minutes for team form (completed during a team meeting),
Scores provided: , Overall ratings in 10 key areas to identify 3 or more priorities for improvement,
Norm-referenced and criterion-referenced?, Yes,
Standardization sample: , 23 schools, with 150 individual staff members,
Components: , Manual and tool,

Bridget Walker, Ph.D., is Assistant Professor in the Master in Teaching Program at Seattle University. She has been involved in the field of education for more than 20 years as a special education teacher and behavior specialist as well as a consultant and trainer. Dr. Walker completed her doctorate at the University of Washington (UW) in 2006. While at the UW, she coordinated the BEACONS (Behavior, Emotional, and Academic Curriculum On the Needs of Students) project and the Check, Connect, and Expect project as part of the UW Behavior Research Center. Dr. Walker has helped more than 30 schools throughout the state of Washington develop schoolwide positive behavior intervention and support programs. In addition, she has consulted with numerous schools and districts, helping them assess and improve their programs and supports at the intensive level for students with, or at risk of developing, emotional and behavioral disabilities. Dr. Walker is the author of several articles on positive behavior interventions and supports and on supporting students with challenging behaviors in schools and treatment settings; she is also the author of two book chapters on effective programs for students with emotional and behavioral disabilities in the context of the philosophical framework of therapeutic Re-EDucation. She is Past President of the Washington Re-EDucation Association (WAREA), a nonprofit agency that she helped found in 1998, as well as Past President of the American Re-EDucation Association. She is also a Regional Coordinator and Master Trainer for the Life Space Crisis Intervention Institute in Maryland. In 2011, she was awarded the PBIS Champion award by the Northwest Positive Behavior Interventions and Supports Network (NWPBIS) for her ongoing work in helping schools effectively implement PBIS to support the success of all students. Douglas Cheney, Ph.D. is Professor of Special Education at the University of Washington (UW), Seattle, where he directs the master's program to prepare teachers for educating students with emotional or behavioral disabilities. Dr. Cheney also codirected UW's doctoral training program in positive behavior interventions and supports (PBIS); Washington's Behavior Research Center on effective behavioral interventions; the Check, Connect, and Expect project; and Washington's PBIS Network between 2001 and 2010. Dr. Cheney has been a consultant to numerous school districts and five state departments; he co-chaired Washington's Statewide Task Force on Behavioral Disorders from 1997 to 1999, which provided a blueprint for the state's PBIS model. He has extensive research experience, having been awarded more than $10 million of funds from the U.S. Department of Education and from state departments of education and mental health in Oregon, New Hampshire, and Washington for more than 20 years. Dr. Cheney has served as co-editor of The Journal of Emotional and Behavioral Disorders and associate editor for Intervention in School and Clinic. He was on the editorial boards of Behavior Disorders and Beyond Behavior. He was President of the Council for Children with Behavior Disorders, a division of the Council for Exceptional Children (CEC), from 1998 to 1999 and Convention Chair for CEC's international conventions in Denver in 2012 and San Antonio in 2013. Dr. Cheney directed the Institute on Emotional Disabilities at Keene State College, New Hampshire, from 1992 to 1997 and was a special education teacher and administrator from 1974 to 1989. In 2010, he was awarded a PBIS Lifetime Achievement Award by the Northwest Positive Behavior Interventions and Supports Network for his PBIS work in schools both nationally and regionally. Dr. Horner is the Alumni-Knight Endowed Professor of Special Education at the University of Oregon, where he directs the Educational and Community Supports research unit. He received his undergraduate degree in psychology from Stanford University, his master's degree in experimental psychology from Washington State University, and his doctorate in special education from the University of Oregon. Dr. Horner's research has focused on developing evidence-based interventions that result in socially significant changes for people with and without disabilities. As co-director with Dr. George Sugai of the Office of Special Education Programs Technical Assistance Center on Positive Behavioral Interventions and Supports, Dr. Horner coordinates research and technical assistance activities with multiple partners across the nation. During the past 20 years, he has worked directly with schools and school administrators in the development of approaches for implementing school-wide systems of positive behavior support. He has been the editor of the Journal of The Association for Persons with Severe Handicaps, co-editor of the Journal of Positive Behavior Interventions, and associate editor for the Journal of Applied Behavior Analysis and the American Journal on Mental Retardation. In recognition of his achievements, Dr. Horner has received multiple awards, among them the Society for the Advancement of Behavior Analysis Public Service Behavior Analysis Award (2006), the American Association on Mental Retardation Education Award (2002), the TASH Positive Approaches Award (2000), and the American Psychological Association Fred Keller Educational Research Award (1996).